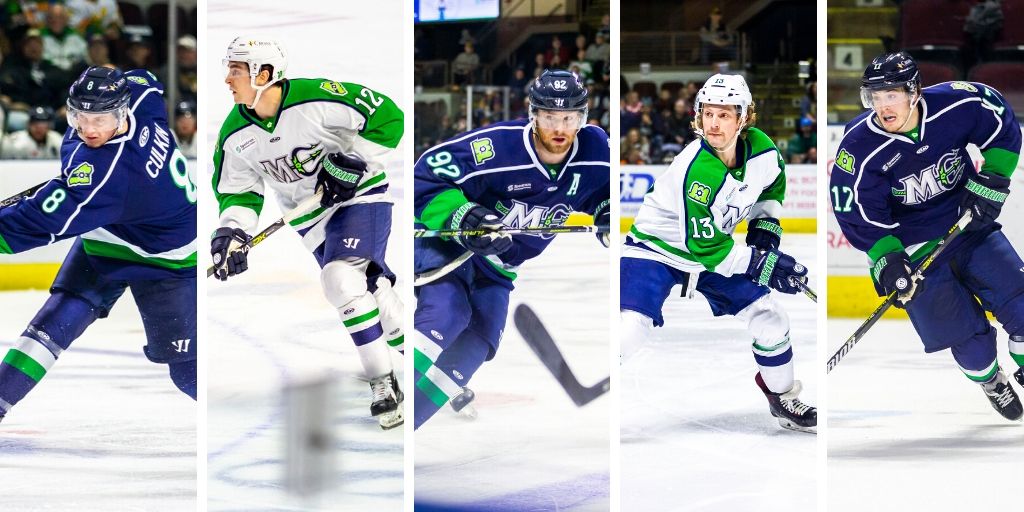 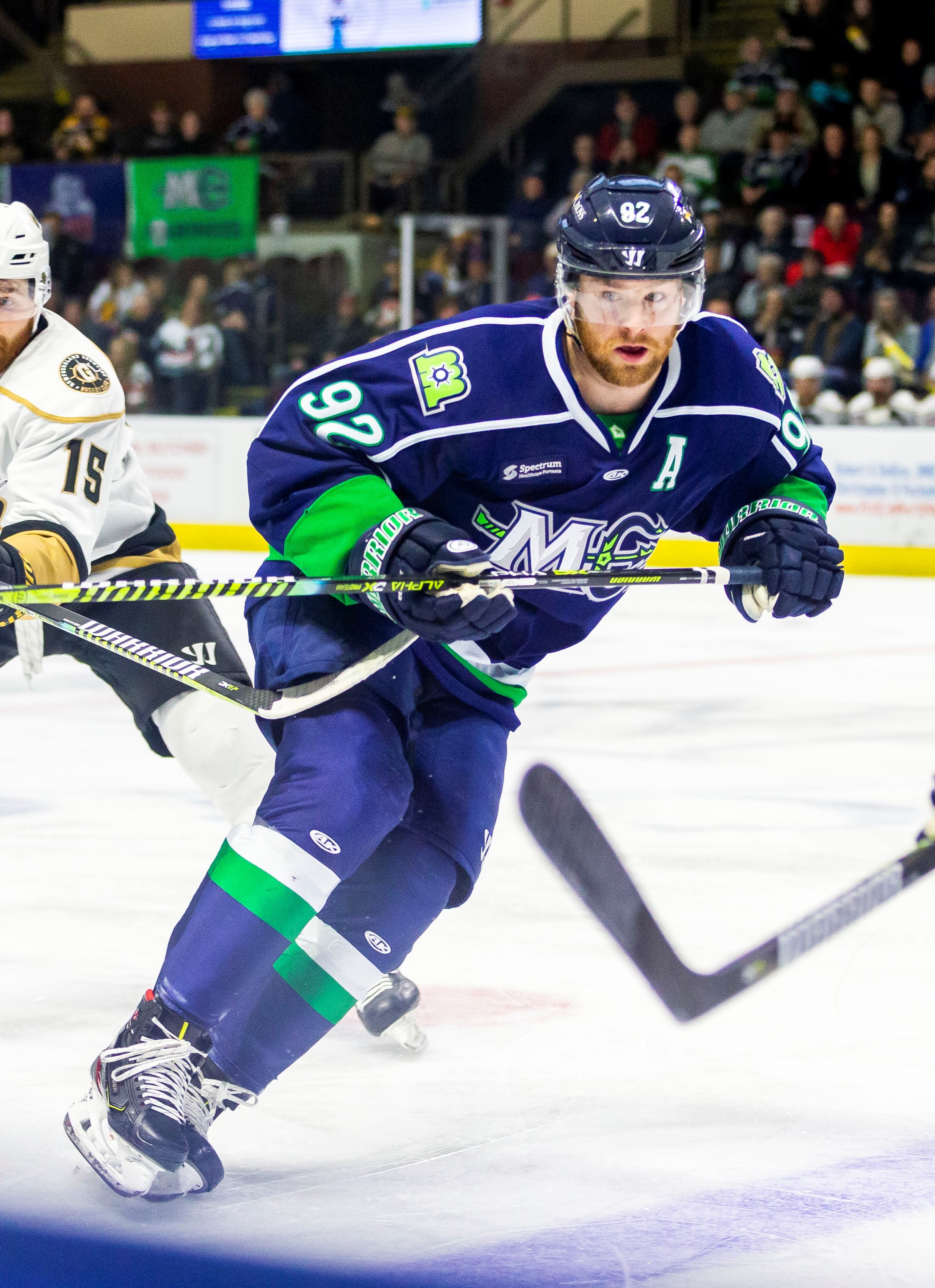 The “Community Leader” Award went to Terrence Wallin. The second year alternate captain put in 12 hours of community service in 2019-20, the most of anyone on the team. He participated in events such as the South Portland Fire and Police Community Open House, volunteering at the South Portland Food Cupboard, and participating in the Aroma Joe’s Community Skate. Wallin also runs “Evolution Hockey,” which puts on camps for youth hockey players and has launched computer-based “Quarantine Classroom,” during the COVID-19 pandemic. Although he’s a native of Pennsylvania, Wallin has Maine roots in Kennebunk, which he called home for many years.

“Terrence has devoted himself to the community in Portland,” said Armstrong “He continues doing work even now with his zoom hockey skills to help develop and grow the game in Maine.”

The “Most Improved Player” award went to Ty Ronning, who saw his season similarly split between Maine and the Hartford Wolf Pack for the second year in a row. The 2016 draft pick of the New York Rangers posted 11 goals and 13 assists in his 28 games as a Mariner in 2019-20.

“The way Ty approached this season on being sent to Maine was a 180 from last season,” said Armstrong. “His maturity level both on and off the ice was eye opening for myself. The way he played in 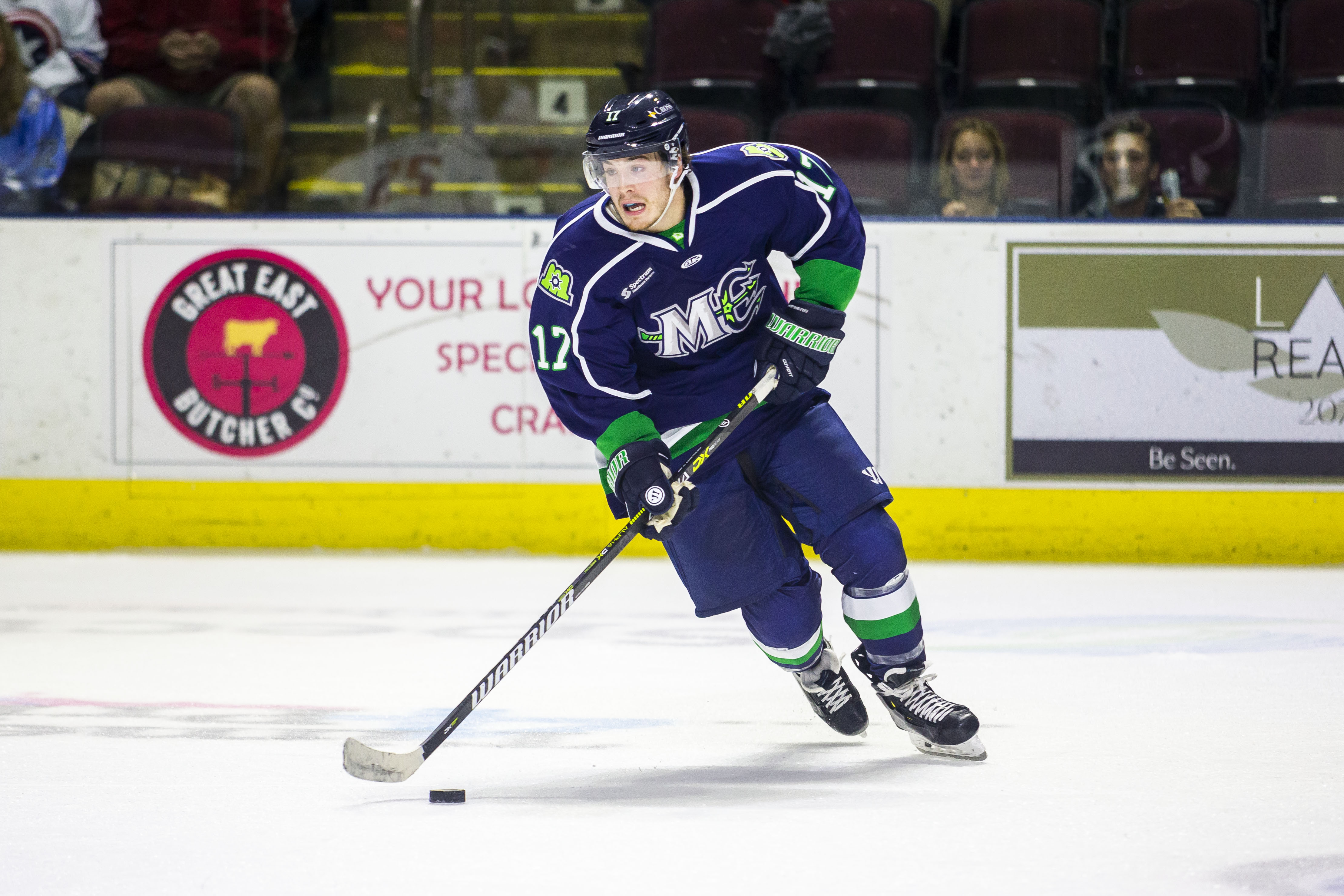 Maine, he really deserved to be up in Hartford.”

Ronning got a pair of call ups to the Wolf Pack – first on October 24th, 2019, and again on February 3rd, 2020, after which he stayed in the AHL for the remainder of the season. With the Mariners in 2019-20, Ronning had three multi-goal games, highlighted by his second career hat trick on January 24th, 2020 in an 8-1 home win against the Worcester Railers. Ronning will forever hold legendary status in Mariners history for his five point ECHL debut on November 24th 2018 vs. Manchester, still a single game franchise record.

The team’s “Unsung Hero” was Dillan Fox for the second year in a row. Fox was tied for the team lead in goals with 23, and power play goals with five. He has also become the franchise’s career leader in both categories though its first two seasons. Fox played in 59 games for the Mariners in 2019-20, second to Michael McNicholas’ 60. 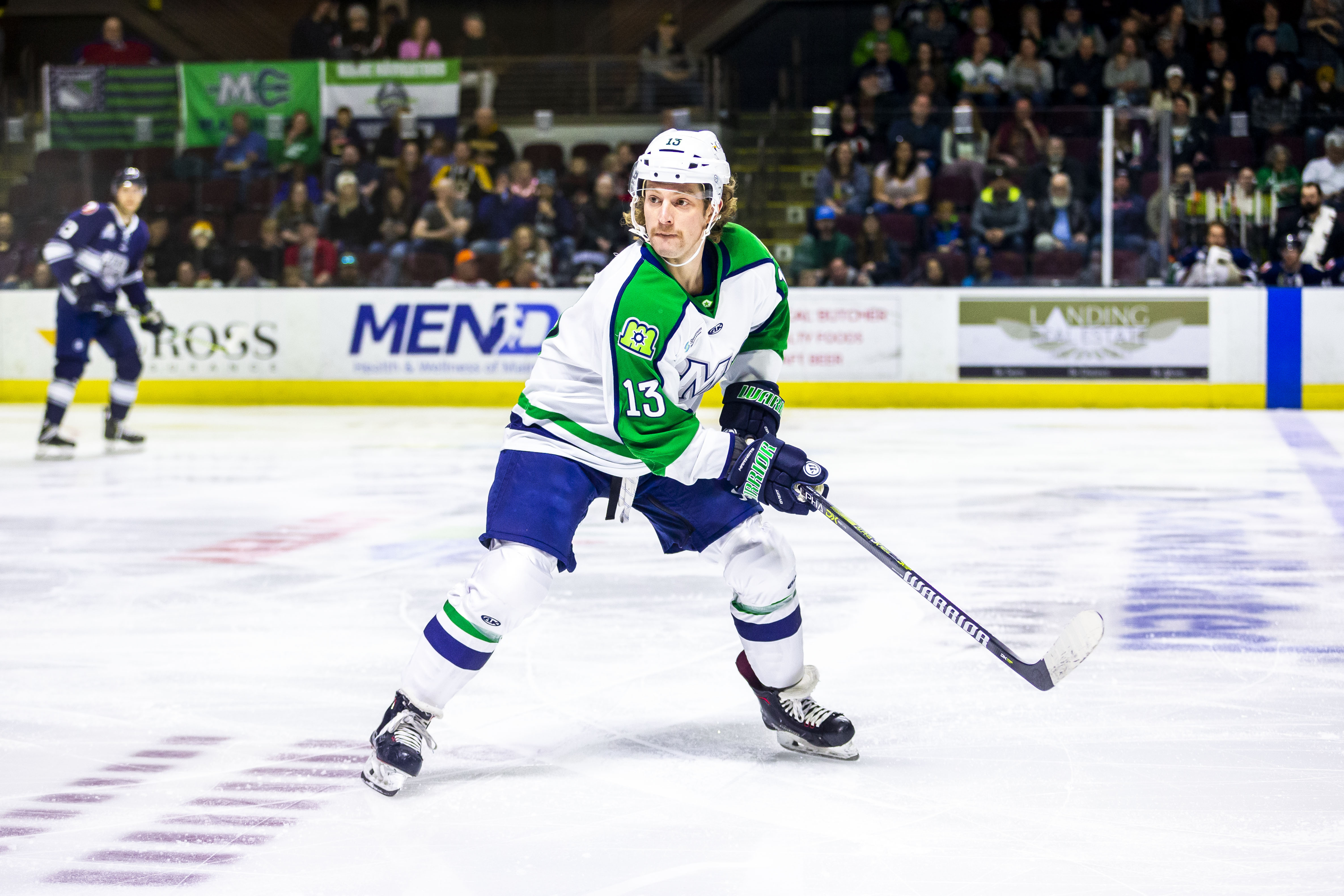 “Dillan pretty much put the team on his back at the start of the year scoring some big goals and breaking the 20 goal plateau,” said Armstrong.

His blazing start to 2019-20 was marked by six goals in the first six games of the season. Fox initially joined the Mariners on a loan from the SPHL in January 2019 and made a name for himself by scoring 16 goals in 37 games for Maine in the inaugural season. This past season, he had nine multi-point games for the Mariners including a four point performance on November 22nd at Norfolk. On December 28th, 2019, Fox was loaned to Hartford, and made his AHL debut by dressing in two games for the Wolf Pack.

Ted Hart was named “Rookie of the Year.” The Cumberland native officially became the first Maine-born Mariner on November 9th, 2019 when he made his ECHL debut in a 5-1 win over the Adirondack Thunder. Hart scored his first ECHL on November 20th at Norfolk and finished the season with 10 goals and eight assists in 48 games. Hart was initially cut from the team after training camp, but put up six 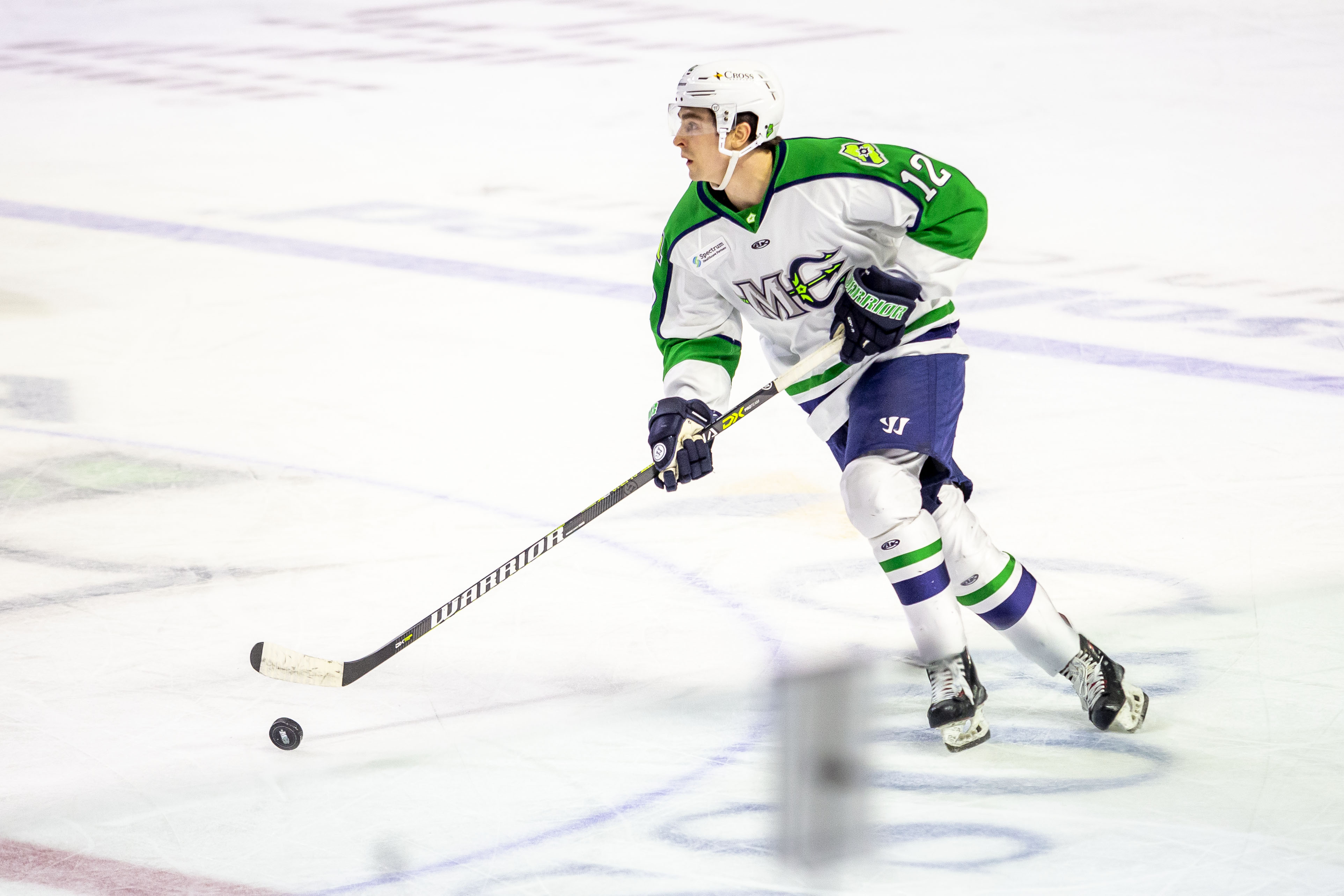 points in five games with the Southern Professional Hockey League’s Peoria Rivermen, and stuck with the Mariners for the rest of the season after his November recall.

“Once he came back to Maine from the SPHL, he showed that he can play in this league,” said Armstrong. “I can see Ted scoring 30 goals [next season] if he puts the work in the summer.”

Hart, 24, is a former two-time Maine state champion for Greely High School and played four seasons of NCAA Division I hockey for Yale University before turning pro this past season.

“Terrence was our most consistent player throughout the course of the year making a big impact in every game that he played in,” said Armstrong. “Ryan was a big part of the D-core even though he only played half the season for us. He played in all key areas and big minutes.”

Wallin finished second on the team with 43 points, and tied Fox for the goals lead, with 23. That mark was a career high in his fifth pro season, and he was seven points shy of his career high in points, with 10 games canceled due to COVID-19. To illustrate his consistency, Wallin had just one span of more than two games without a point in the entire 2019-20 season. He registered his first career hat trick on January 3rd, 2020 against the Jacksonville Icemen. 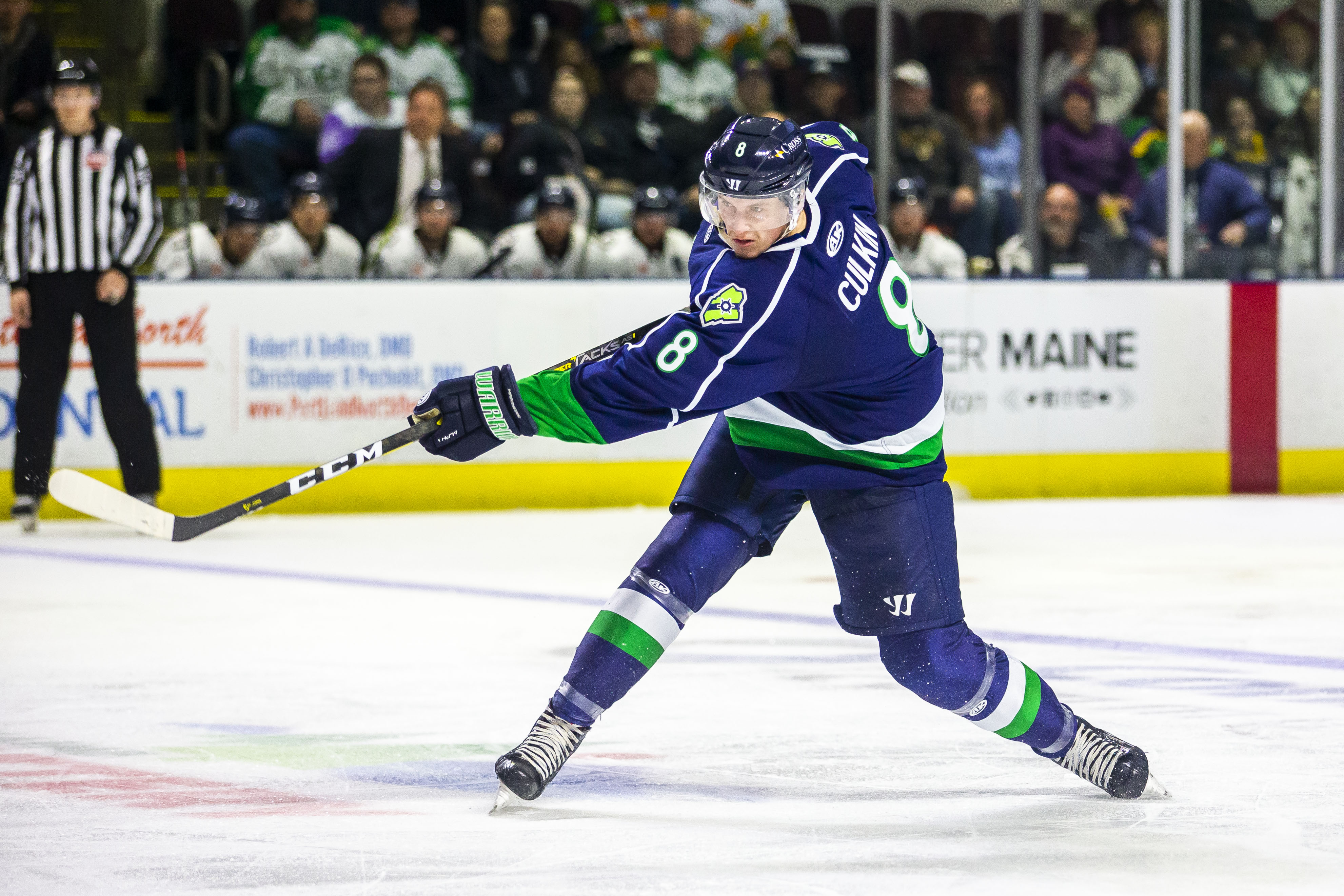 Culkin, also a second year Mariner, was remarkably productive offensively from blue line. His 33 points in 45 games was by far the most by a Mariners defenseman (13 more than the next highest: Sean Day), and also good for fifth on the team overall. Under contract with the AHL’s Laval Rocket, Culkin was recalled in late November and again – for good, in mid-February. Like Fox, Culkin had a four point game on November 22nd in Norfolk, highlighting his season.

The Mariners are supporting local COVID-19 relief efforts in a number of ways. “HOME” t-shirts are on sale through Friday, April 24th at the online merchandise store, with net proceeds benefitting the United Way of Greater Portland and other local COVID-19 relief funds. Local school districts and other non-profits are also being supported by the Mariners by way of an exclusive specialty jersey auction through Handbid, which runs through May 1st. Additionally, the Mariners have partnered with Evergreen Credit Union, the Portland Sea Dogs, and the Maine Red Claws to support the Good Shepherd Food Bank in a virtual food drive at Fans4Food.com.