PORTLAND, ME – May 5, 2022 – The ECHL announced the full 2022-23 schedule on Thursday, officially marking the fourth season of Maine Mariners hockey to get underway on Friday, October 21st, 2022. The Mariners will begin the season on the road in Trois-Rivieres, QC before turning around to host the Lions in the home opener on Saturday, October 22nd at 6:00 PM. The Mariners 2022-23 season will once again be presented by Hannaford To Go. The full schedule can be viewed here.

The Mariners and Lions will play a third game over the season’s opening weekend – in Portland again on Sunday, October 23rd at 3:00 PM. Trois-Rivieres makes a total of seven trips to Maine in the 2022-23 season, the most of any visiting team – tied with the Norfolk Admirals, who will join the ECHL’s North Division, migrating from the South.

The Admirals will move from the South to the North due to the addition of the Savannah Ghost Pirates expansion club to the ECHL. The re-alignment gives the North seven teams, as it had in the Mariners inaugural season of 2018-19. All four ECHL divisions (North, South, Central, Mountain) will now contain seven teams.

The month of November is tied (with March) for the busiest home month of the Mariners 2022-23 schedule, as they will host seven games at the Cross Insurance Arena. A four-game homestand begins the month with matchups against the Newfoundland Growlers and Reading Royals. The Mariners also play three home games around the Thanksgiving holiday against the same two teams: Reading in town on November 23rd and 25th, while Newfoundland returns on the 26th.

It’s a sprint coming out of the Christmas break, with home games on December 28th against the Worcester Railers and the 30th against Trois-Rivieres. New Year’s Eve and Day brings a home-and-home with Worcester – at DCU Center on December 31st and back in Portland on January 1st to ring in 2023. 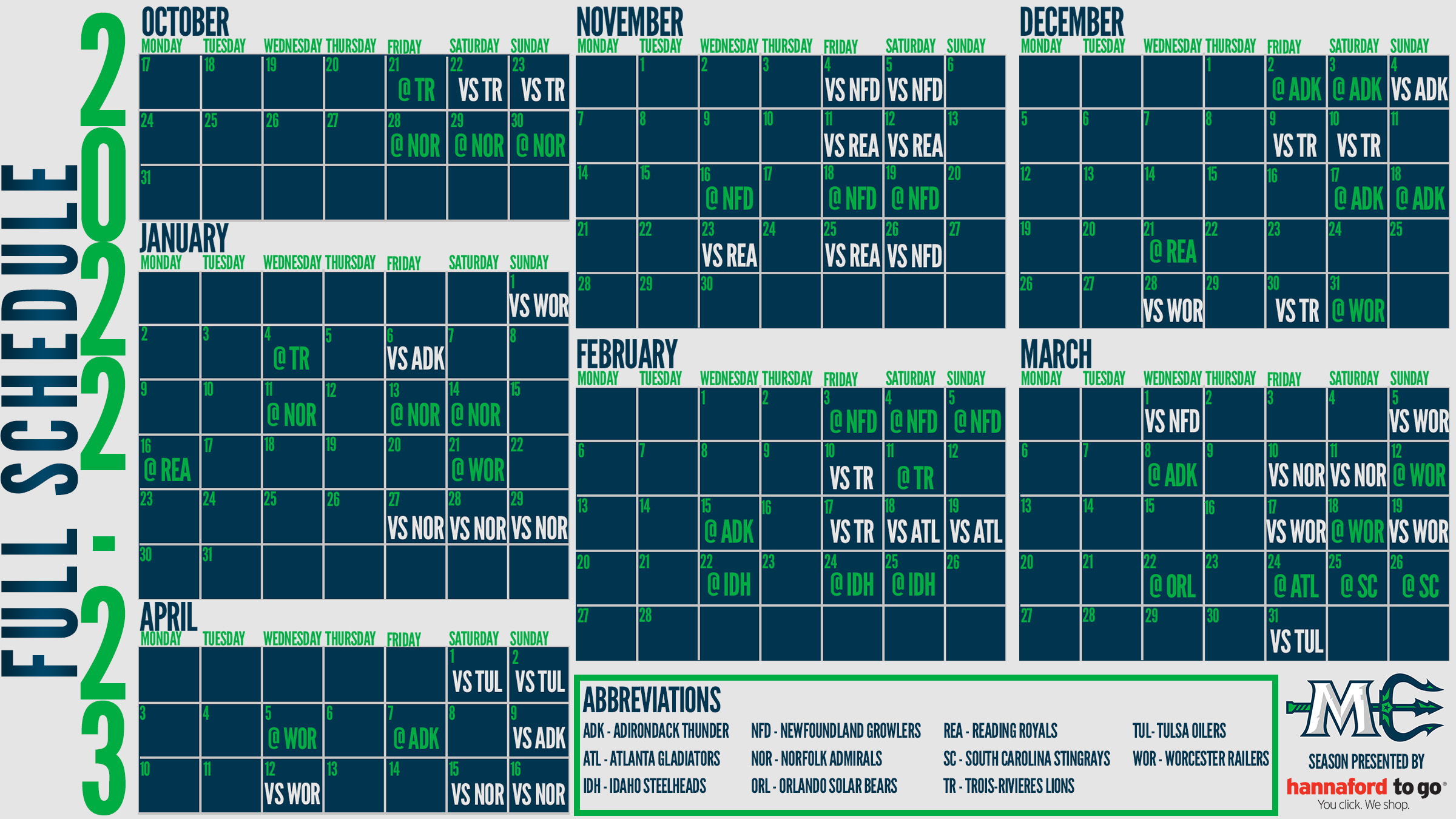 In addition to their six North Division foes, the Mariners will play five out-of-division teams in 2022-23, including two teams that will visit Portland for the first time. On February 18th and 19th, the Mariners have their inaugural meetings with the Atlanta Gladiators, whom they will then visit in March. From March 31st – April 2nd, the Tulsa Oilers come to the Cross Insurance for a three-game series, also marking a first-ever matchup. The Mariners will make trips to Idaho and South Carolina for the first time, and also return to Orlando for one game against the Solar Bears for the second year in a row.

After going on an exciting run to end the 2021-22 season, the Mariners have a heavy home schedule at the end of 22-23, finishing with a four game April homestand to wrap up the regular season, which concludes on April 15th and 16th against Norfolk. Maine won its final six regular season home games – plus the first two playoff games, to go on an eight-game home winning streak in March and April of 2022.

Full and half season packages plus 12-game mini plans for the 2022-23 season are on sale now by calling 833-GO-MAINE or visiting the Mariners front office at 94 Free St. in Portland. Prospective package holders can also put down a deposit or fill out an inquiry form at MarinersOfMaine.com. Single game tickets will go on sale in September.