PORTLAND, ME – March 21, 2019 – The Mariners added a forward to the roster on Thursday, signing 24-year-old forward Nick Master to a SPC. Master just finished up a four year college career at UMass-Lowell

Master was born in Broomall, PA and played three years in the Philadelphia Jr. Flyers program, where he was a teammate of Mariners forward Dwyer Tschantz. Master played two seasons in the USHL with the Cedar Rapids Roughriders and Tri-City Storm. With the Storm in 2013-14, Master finished second on the team with 23 goals and third in scoring with 42 points in 56 games. He then averaged a point per game in a seven game playoff run.

In his freshman season at UMass-Lowell, Master posted 24 points in 39 games, tying him for 10th among all Hockey East rookie scorers. He was named team Rookie of the Year. In his sophomore season (2016-16), the River Hawks captured the Hockey East Title. Master remained a steady fixture in the River Hawks lineup throughout his college career, but his freshman season remained his best, statistically. This season, he put up 16 points (6 goals, 10 assists) in 37 games, with the team holding a 9-0-3 record when he registered a point. Last weekend, Lowell’s season ended at the hands of Boston University in three games of the Hockey East Quarterfinals. Master had a goal and an assist in the series.

The Mariners will visit Worcester tomorrow at 7:05 before hosting Manchester at 3:00 PM on Sunday. They currently hold a one point advantage over the Monarchs for third place in the North Division, and two over Worcester. Sunday is Country Night presented by 99.9 The Wolf. The first 500 fans will get a bandanna and concert giveaways will be held during the game including Luke Bryan, Florida Georgia Line, and Old Dominion. Tickets can be purchased HERE or by calling the Trusted Choice Box Office at 207-775-3458. 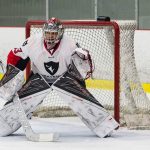