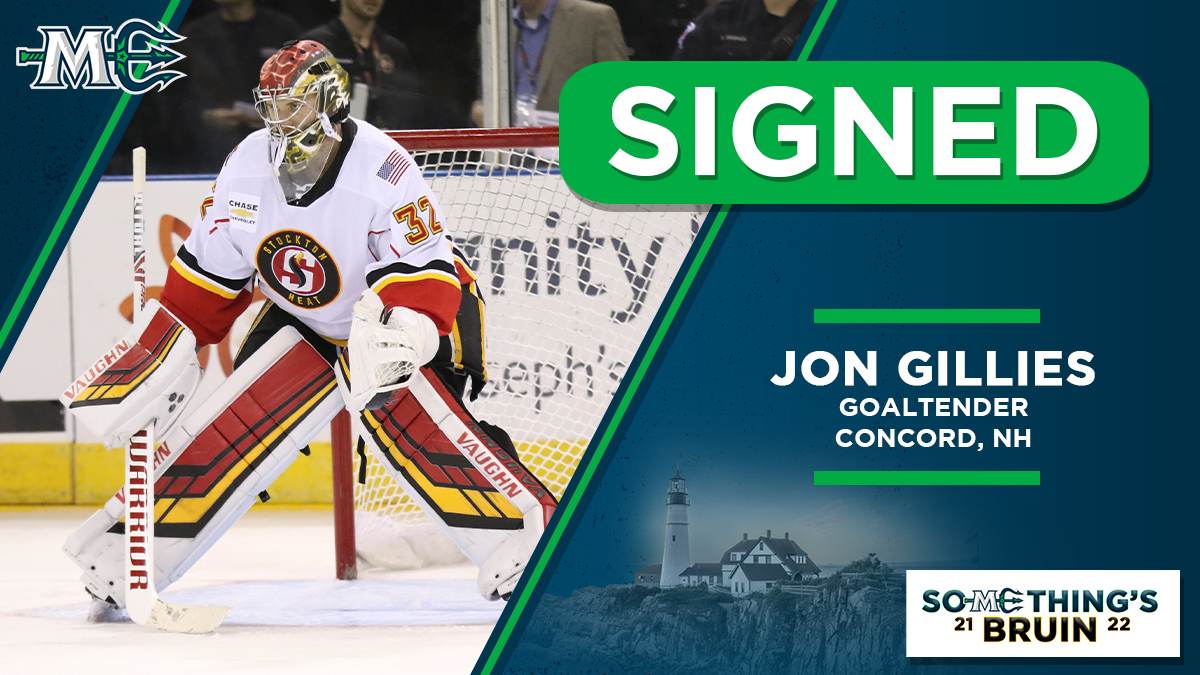 PORTLAND, ME – October 27, 2021 – The Mariners have signed goaltender Jon Gillies to a contract, the team announced on Wednesday. A New Hampshire native with Maine roots and a former draft pick of the Calgary Flames, Gillies has spent the last three seasons in the American Hockey League.

The Flames chose Gillies in the 3rd round of the 2012 NHL Entry Draft after he played two seasons for the Indiana Ice of the United States Hockey League. Gillies led all USHL goaltenders in games played in 2011-12, with 53. He posted a 2.77 goals-against average and a .915 save percentage, which was 5th in the league.

Gillies, who is from Concord, NH (but grew up in South Portland, ME), then attended Providence College where he led the Friars to the 2015 National Championship, their first in program history. That season he was named the NCAA Tournament Most Valuable Player and the Hockey East Goaltender of the Year. His 2.01 GAA was also the second-best single season mark in program history. He finished his career at Providence with a record of 60-34-13, a 2.08 GAA, and a .931 SV%.

After re-signing with the Flames, Gillies spent the 2018-19 and 2019-20 seasons as Stockton’s starting goaltender. He then signed a two-way deal with the St. Louis Blues in October 2020. He was assigned to the AHL’s Utica Comets and appeared in five games, posting a record of 3-1-2.

Gillies will join Jeremy Brodeur and Zach Bouthillier, who each started a game last weekend, in the Mariners goaltending ranks.

The Mariners, proud affiliates of the Boston Bruins, begin a five game homestand on Friday, welcoming in the expansion franchise, the Trois-Rivieres Lions for the first time at 7:15 PM. Bruins TV broadcaster Jack Edwards will make an appearance and it’s a 1-2-3 Friday: $1 popcorn, $2 hot dogs, and $3 draft beer through the start of the 2nd period. The Mariners are also home on Sunday for a Halloween afternoon contest against the Reading Royals at 3:00 PM, the “Scary Sundays.” Tickets can be purchased online at MarinersOfMaine.com or by visiting the Trusted Choice Box Office inside the Cross Insurance Arena.