PORTLAND, ME – October 11, 2018 – The Maine Mariners opening night roster is set. After a last minute trade with the South Carolina Stingrays, a group of 23 players (21 active, two reserve) will make up the inaugural Mariners roster heading into Saturday’s season opener at the Cross Insurance Arena against Adirondack.

The Mariners acquired forward Luke Stork from South Carolina in exchange for defenseman Chris Leone to complete the roster. Leone had just been traded from Cincinnati to Maine on Wednesday with forward Brady Vail going to the Cyclones. Stork (6’0, 174 lbs), is a 23 year old rookie from Pittsburgh, PA who played four seasons at Ohio State University. He was an alternate captain last season in his senior year.

The roster shakes out this way:

ECHL teams can carry 21 players on the active roster through the first 30 days of the regular season, after which the limit drops to 20.

The Mariners, proud affiliate of the New York Rangers, will begin the regular season at Cross Insurance Arena on Saturday night against the Adirondack Thunder at 6:00 PM. The Mariners are members of the ECHL: the premier AA hockey league in the United States. Single game tickets are on sale now at www.MarinersOfMaine.com or by calling the Trusted Choice Box office at 207-775-3458. Fans interested in season tickets, groups, five game plans, or flex packs can call 833-GO-MAINE. 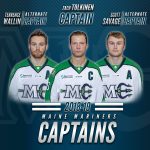 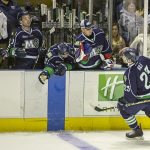 MARINERS FALL IN INAUGURAL GAME TO ADIRONDACK
Scroll to top