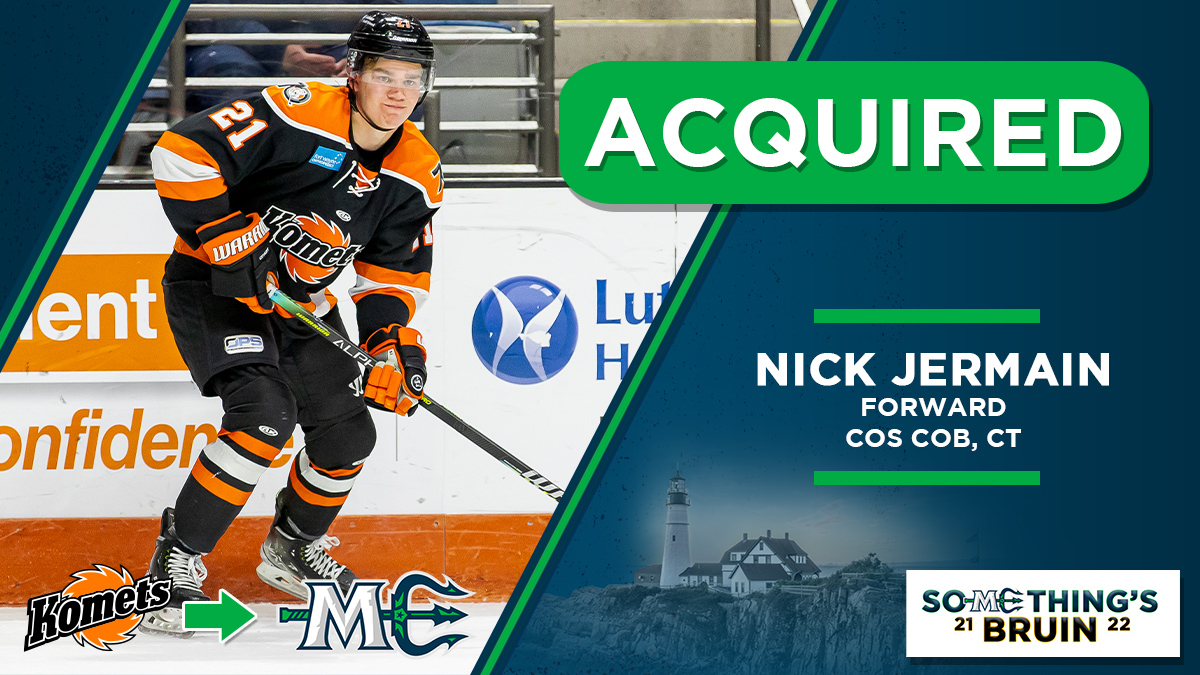 PORTLAND, ME – January 20, 2022 – The Mariners acquired forward Nick Jermain from the Fort Wayne Komets on Thursday, in exchange for goaltender Zach Bouthillier. Jermain is a rookie and former captain at Quinnipiac University.

Jermain, 25 years old, hails from Cos Cob, Connecticut. After attending Brunswick School to play prep hockey, he joined the Connecticut Oilers Eastern Hockey League program, followed by the Merritt Centennials of the British Columbia Hockey League. He had big season for Merritt in 2015-16, posting 54 points in 54 games, and leading the squad with 29 goals.

Jermain then played NCAA Division I hockey at Quinnipiac University from 2016-20, culminating in the captaincy for the 2019-20 season. In 123 career collegiate games, he scored 26 goals and added 25 assists. Last season, Jermain played professionally in the United Kingdom, appearing in 13 games for the Coventry Blaze in Coventry, England.

In his first year of North American pro hockey, Jermain has skated in 28 games for Fort Wayne, and has 15 points – 13 of which are assists, which was tied for third on the Komets.

Rookie goaltender Zach Bouthillier goes to Fort Wayne in the deal. Bouthillier has appeared in seven games for the Mariners this season, posting a 2-2-1-0 record, a 3.60 goals-against average and an .898 save percentage.

The Mariners host the Orlando Solar Bears three times this weekend, starting Friday at 7:15 PM. It’s Women in Sports night, featuring a pre-game panel, highlighted by former U.S. Olympian and current President of the Boston Pride, Colleen Coyne. It’s also a 1-2-3 Friday: $1 popcorn, $2 hot dogs, and $3 Bud Light Drafts through the start of the 2nd period. The game is presented by KitNA Brewing. The Mariners have back-to-back “3Kends” to finish January, hosting games on the final two Fridays, Saturdays, and Sundays of January. The “3Kends” are presented by $3 Deweys. Individual tickets for all games can be purchased online at MarinersOfMaine.com/tickets or by visiting the Trusted Choice Box Office inside the Cross Insurance Arena.