PORTLAND, ME – February 12, 2019 – Defenseman Josh Couturier played his most recent game at the Cross Insurance Arena. It’s now where he’ll play his home games. The Mariners and Wheeling Nailers announced a trade on Tuesday, sending Couturier to Maine in exchange for future considerations. The Mariners had been managing with just six defenseman on the roster after the loan of Zach Tolkinen to Hartford.

Couturier is a New England product, born in Newbury, MA, playing for the EJHL’s Boston Jr. Bruins at the start of his Junior hockey career. After a brief stop in the USHL with the Des Moines Buccaneers, he returned to Boston to re-join the Jr. Bruins at the USPHL Premier level, and eventually committed to Boston College. After one year at BC, he transferred to the University of Massachusetts, sitting out 2016-17 due to transfer rules, and playing 39 games last season, with two goals and 13 assists. The now 23-year-old Couturier signed with Wheeling in late September 2018.

In 23 games with the Nailers, Couturier has one goal and one assist, with 12 penalty minutes. He scored his first professional goal on December 27th at Indy. He was in the lineup this past Sunday, as the Mariners beat Wheeling, 4-1.

The Mariners are home on Wednesday night, finishing their five game homestand as they return to divisional play and host the Worcester Railers at 7:00 PM. Only two home games remain in the month of February – the other is Sunday, February 24th at 3:00 PM also against Worcester. A full team autograph session will follow the game. General admission tickets can be purchased HERE or by visiting or calling the Trusted Choice Box Office: 207-775-3458. 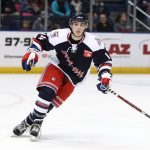