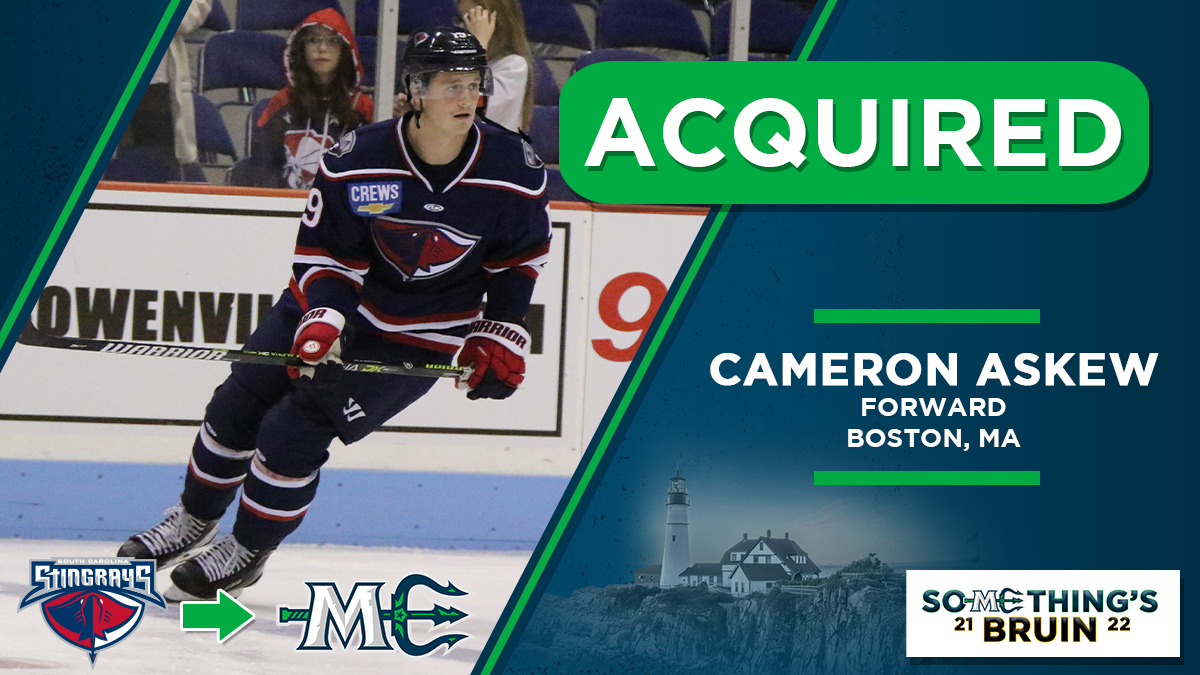 PORTLAND, ME – September 16, 2021 – The Maine Mariners completed a trade with the South Carolina Stingrays on Thursday, acquiring forward Cameron Askew. In exchange, the Mariners will owe the Stingrays a future consideration. Askew has spent all three of his professional seasons with South Carolina, but was born in Boston, MA.

After playing prep hockey in Massachusetts for St. Sebastian’s School and Cushing Academy, Askew took his game to the Quebec Major Junior Hockey League. He played the 2014-15 season with the Drummondville Voltigeurs and joined the Moncton Wildcats the following year, where he would spend two and a half seasons. In 2015-16, he put up a career 65 points in 66 games, including 32 goals. His point total was second on the team only to line mate and future NHLer Conor Garland, now a member of the Vancouver Canucks.

Midway through the 2016-17 season, Askew was traded from Moncton to the Shawinigan Cataractes. The following year, he was dealt again – from Shawinigan to the Charlottetown Islanders. The Islanders went on a deep playoff run in 2018, falling in game seven of the semi-finals. Askew put up 11 points in 18 postseason games. He played in the playoffs during all five of his QMJHL seasons.

Askew turned pro in the 2018-19 season, signing with South Carolina. He had an impressive rookie campaign, with 27 points (17 goals, 10 assists) in 47 games. He also added three assists in five playoff games. Askew enjoyed a similar sophomore season in 2019-20, with 28 points (12 goals, 16 assists) in 55 games. In 2020-21, he played in 43 games, scoring nine goals and adding five assists. The Stingrays made it all the way to the Kelly Cup Finals, but Askew did not appear in the playoffs.

“We are excited to welcome onboard a player like Cam,” said Mariners Head Coach Ben Guite. “He’s an experienced player that strengthens our forward group with his size, grittiness and ability to score. He has the ability to play up and down our line up and help on both special teams units. His best hockey is still ahead of him and we are looking forward to seeing him do it in a Mariners uniform.”