PORTLAND, ME – March 19, 2022 – For the second consecutive night, the Mariners were held without a goal the South Carolina Stingrays collected a 2-0 victory over Maine on Saturday night at the Cross Insurance Arena. Ryan Bednard stopped all 40 Mariners shots to earn the shutout.

Despite an entertaining first 40 minutes, the game was scoreless heading into the third. The Stingrays, dealing with a scoreless streak of their own after being blanked 3-0 by Worcester on Friday night. The Mariners had an extended 5-on-3 opportunity midway through the first but finished the night 0/4 on the power play. Jeremy Brodeur turned in another solid performance, matching Bednard through two periods. Early in the 2nd, it appeared that Nick Master had scored on a shot in the slot, but upon video review it was confirmed to have hit the post.

South Carolina’s Derek Gentile finally broke the scoreless tie at 7:11 of the third, when his wrister from the right circle beat Brodeur’s glove. The Mariners pushed hard with great scoring chances to try and tie it up but Barret Kirwin sealed the game with an empty netter at 19:18.

The Mariners (25-26-4-2) and Stingrays go at it again tomorrow afternoon at 3 PM to finish the weekend. The “Battle of the Badges” championship game will precede the game and the winner of the 2022 Captain Joel Barnes Award will be recognized. Tickets for all home games can be purchased online at MarinersOfMaine.com/tickets or by visiting the Trusted Choice Box Office inside the Cross Insurance Arena. 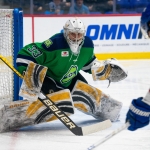 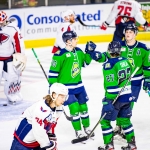