TROIS-RIVIERES, QC – February 5, 2022 – For the second consecutive game, Zach Malatesta scored in overtime to clinch a Mariners victory in Trois-Rivieres. On Saturday night, it came after the Mariners surrendered a three-goal lead in the third period, but regrouped to complete a three-game road sweep of the Lions.

The game began an hour late and took place on the backup rink inside the Colisee Videotron, due to an issue with a patch of ice in the main rink. Rookie forward Tyler Hinam scored his first professional goal on the power play at 12:26 of the opening period to open the scoring. That was the only goal of the opening 20 minutes for either team.

Pat Shea scored on a breakaway two-and-a-half minutes into the second period to double the lead and Conner Bleackley added a goal four minutes later off a 3-on-2 rush to make it 3-0. Trois-Rivieres starting goaltender Philippe Desrosiers was replaced by Tristan Berube after the third Mariners goal. Cam Hillis finally got the Lions on the board at 13:40 against a stingy Jeremy Brodeur. The Mariners took a 3-1 lead into the third.

The Lions pushed hard in the third but fell back down three when Hinam scored his second of the game at 10:55, ripping a shot from the left circle past Berube. Hillis scored his second of the game two minutes later to bring it back to 4-2, setting the stage for the Lions to mount a comeback with their goalie pulled. At 16:36, Alexis D’Aoust was able to bury a rebound after Brodeur stretched his pad to rob Anthony Nellis. The Mariners then went to a four minute power play with just under 2:30 to play, but Shea was quickly called for a trip putting the game back to even man-power. With 1:44 remaining, Shawn St-Amant tied the game, tipping a pass from Charles-David Beaudoin through Brodeur, who got a piece of it but not enough.

The overtime was the fifth between the Mariners and Lions in their 11 meetings. With Maine carrying a power play into OT, Malatesta converted just after the penalty expired, crashing the net to put home a rebound generated by Keltie Jeri-Leon’s initial shot.

Brodeur made 43 saves to earn his 13th win over the season, while Berube was saddled with the loss, stopping 18 of 20. The Mariners have a season high three game road winning streak and a five game point streak, tying a season best.

The Mariners (19-15-3-2) now head to St. John’s, Newfoundland for four games against the Growlers, starting on Wednesday of next week. They make their return to the Cross Insurance Arena on Friday, February 18th also against the Growlers at 7:15 PM for Star Wars Night and a 1-2-3 Friday. Saturday, February 19th is “Throwback Night” against Trois-Rivieres at 6 PM, featuring $8 tickets, and an auction of the Bruins inspired throwback jerseys. Individual tickets for all games can be purchased online at MarinersOfMaine.com/tickets or by visiting the Trusted Choice Box Office inside the Cross Insurance Arena. 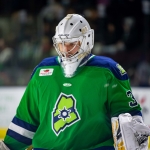 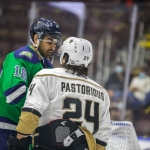