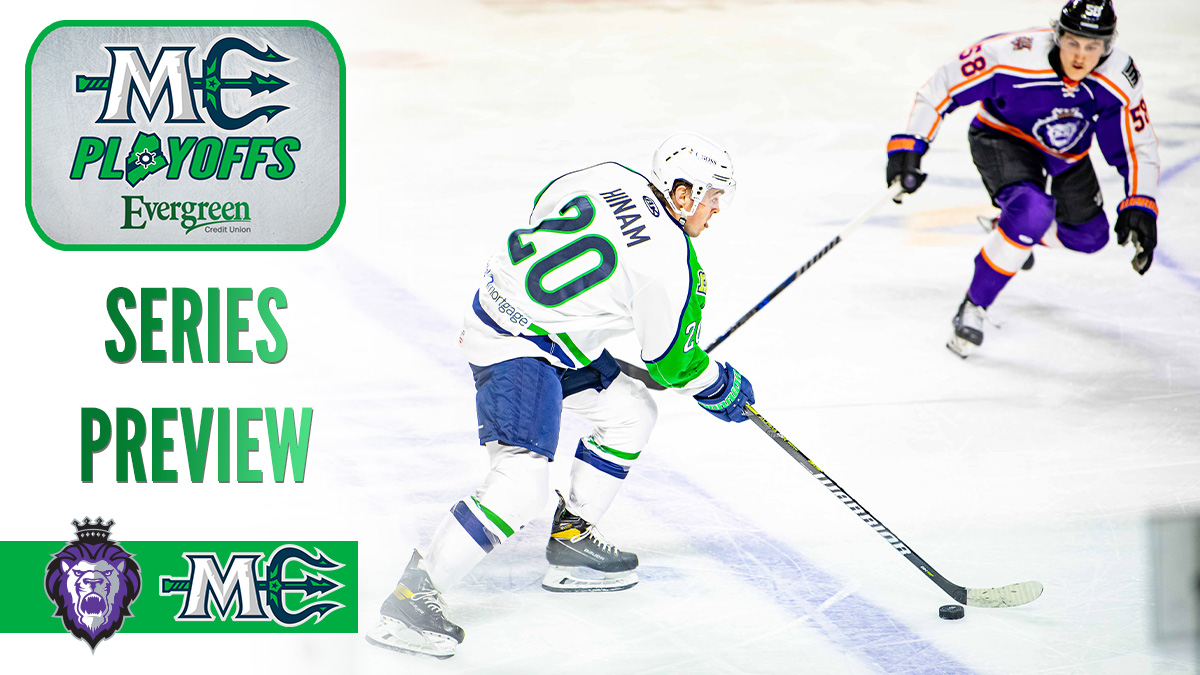 The Maine Mariners begin their first Kelly Cup playoff run in club history with a first round matchup against the top seeded Reading Royals. The Royals finished the 2021-22 regular season with the best record in the North Division and Eastern Conference, and the second best mark in the entire ECHL. Although the Mariners come in as the #4 seed in the North and clear underdogs, they took the season series from the Royals, getting points in four of the six head-to-head meetings. The series opens on Wednesday night at Santander Arena in Reading, where the Mariners played a three game series just two weekends ago.

Oct. 31, 2021: Reading 1 @ Maine 4
-The fourth game of the Mariners season. Cam Askew had a goal and an assist, Andrew Romano scored his first ECHL goal.

Apr. 8, 2022: Maine 1 @ Reading 4
-The Mariners could only muster a 2nd period goal from Pascal Laberge. Darion Hanson wins his pro debut in net for Reading.

Apr. 9, 2022: Maine 3 @ Reading 5
-The Mariners rallied from a three goal deficit to trail by one heading to the third, but couldn’t get even. 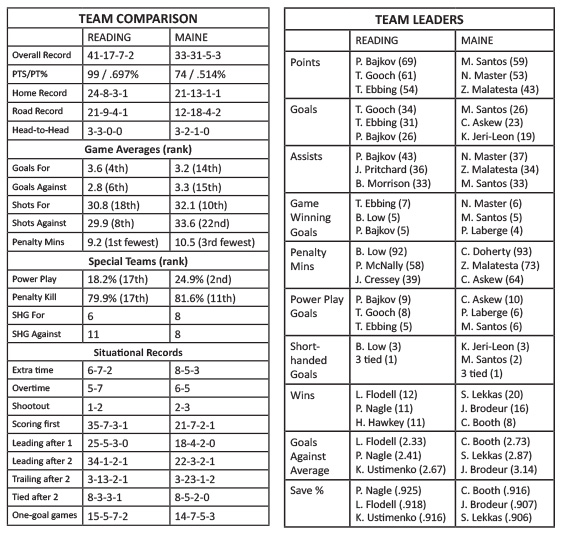 HOW THE MARINERS GOT IN

The odds were stacked against the Mariners entering the final week of the regular season, needing multiple wins and out-of-town help to make it in. They entered last Wednesday .007 percentage points behind the Worcester Railers for the fourth and final spot, with an outside chance of catching the Trois-Rivieres Lions, who sat in third. Both the Mariners and Railers won on Wednesday, leaving things up to the final weekend. The turning point came on Friday when Trois-Rivieres shut out the Railers to clinch their playoff spot, while the Mariners rallied to beat Newfoundland on Mathew Santos’ overtime winner, taking control of their own destiny. With the Railers and Lions playing an afternoon game prior to Maine’s regular season finale on Saturday, the Mariners would know what was needed of them before taking the ice. As the Railers lost to Trois-Rivieres in overtime, the Mariners needed just one point to clinch. Entering the third period of their game up on the Growlers 2-1, they surrendered a goal early in the period, but went back ahead midway through on a controversial goal by Nick Master. After Newfoundland tied it at 3, it was a tense final six minutes in which the Mariners held on to force overtime and clinch. The game would ultimately be decided in a shootout by none other than Santos, whose backhander in the bottom of the 2nd round sealed the win a 3-0-0 final home stand.

The Royals have been one of the most consistently successful franchises in ECHL history, appearing in their 14th postseason in 20 years of existence. They were Kelly Cup champions in 2012-13, the final season of current Royals Head Coach Kirk MacDonald’s playing career. MacDonald, now in his fourth season as Royals head coach, led them to their best point percentage in franchise history (.697), finishing one win shy (45) of tying the franchise mark. This is Reading’s second postseason appearance under MacDonald. After losing in the first round in 2017-18, the Royals missed the playoffs in 2018-19 and were on track for the #2 seed in 2019-20 before the pandemic. Reading hasn’t made it out of the first round since 2015-16 and 2013 remains their only championship.

AROUND THE KELLY CUP PLAYOFF BRACKET

The 2022 Kelly Cup Playoffs are presented by Evergreen Credit Union. The Mariners Broadcast Network will carry live coverage of games one and two on FloHockey.tv, MarinersOfMaine.com/listen, and the Mixlr App, with pregame coverage starting at 6:45 PM. Tickets for games three, four and five (if necessary) in Portland, are on sale now at MarinersOfMaine.com/playoffs.