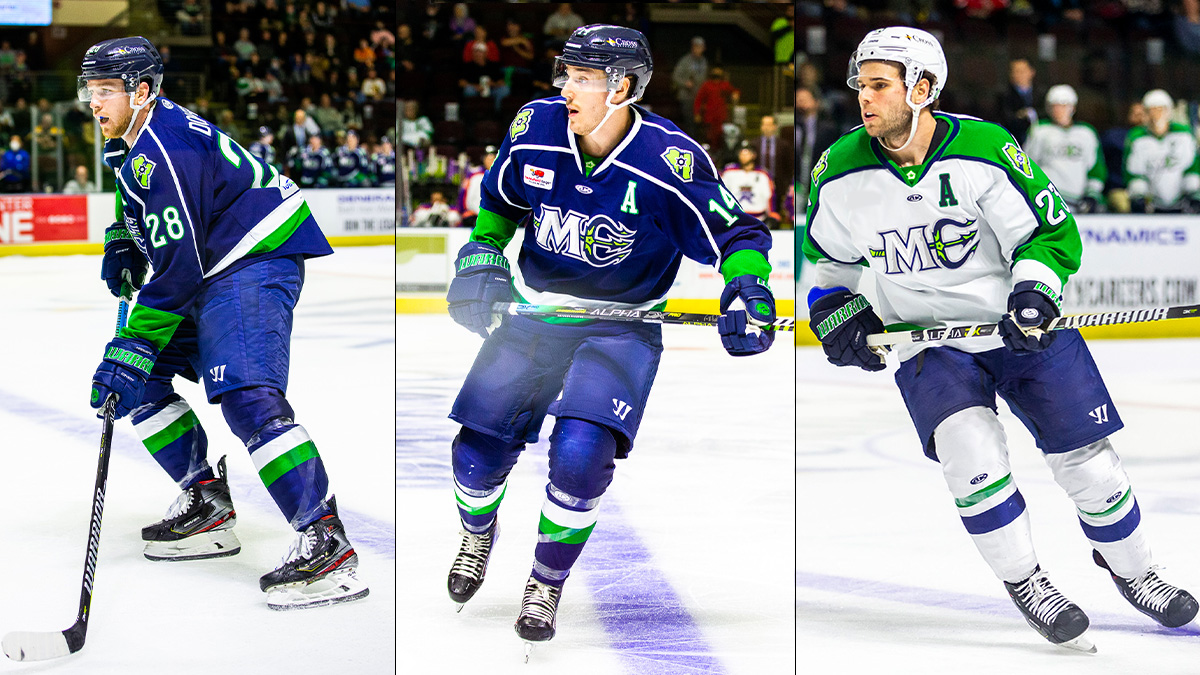 PORTLAND, ME – November 11, 2021 – The Maine Mariners announced their 2021-22 captains on Thursday, as voted on by the players. Defenseman Connor Doherty has been named Captain, while defenseman Brycen Martin, and forward Alex Kile will serve as the full-time alternate captains. Defenseman Michael Kim and forward Lewis Zerter-Gossage will wear the “A” on a home-road split as Kile continues to recover from an injury.

Doherty was acquired by the Mariners in a late July trade with the Worcester Railers. A four-year “veteran” of the ECHL (although not officially veteran status), he is 28 years old. In his senior year of college in 2016-17 with Sacred Heart University, he wore an “A.” Doherty’s leadership continued to shine through with the Railers, even off the ice, as he was awarded the 2019-20 ECHL Community Service Award. He spent the 2020-21 season playing for the Fort Wayne Komets and Kansas City Mavericks. Doherty is from Holden, Massachusetts.

Brycen Martin is in his second season with the Mariners, but his first since 2018-19. The defenseman just skated in his 200th career ECHL game on Halloween. He’s also played 21 games in the American Hockey League. Martin was a 2014 third round draft choice of the Buffalo Sabres and turned pro at the end of the 2014-15 season. The 25-year-old from Calgary, Alberta played for the Norfolk Admirals in 2019-20 and spent 2020-21 playing in Poland, but his best offensive season was the 2018-19 campaign with the Mariners, when he put up 28 points in 54 games.

Alex Kile is an original Mariner and can even be described as “the” original Mariner, as he was the first player to sign a contract with the franchise. Hailing from Troy, Michigan, Kile captained the University of Michigan squad as a senior in 2016-17. His professional career first took him to the Rochester Americans of the AHL, and then to their ECHL affiliate, the Cincinnati Cyclones. He inked a deal with Maine in the summer of 2018. Kile ranks third on the Mariners franchise points leaderboard, with 71, and fourth in goals, with 29. He led the 2019-20 Mariners with 51 points, and put up an identical mark in 2020-21 for the Florida Everblades. The 27-year-old Kile has been sidelined with a lower body injury to start the 2021-22 season.

With Kile out, the Mariners also named two additional alternate captains, which will rotate wearing the “A” based on a home/road split. Defenseman Michael Kim will sport the “A” for home games, while forward Lewis-Zerter Gossage will wear it on the road. Mariners Head Coach Ben Guite will join play-by-play broadcaster Michael Keeley Thursday night on the Mariners Coach’s Show at 7:00 PM to discuss the captain selections, with Zerter-Gossage joining the show at 7:30. The Coach’s Show will stream live on Facebook and on the Mariners Radio Network, at MarinersofMaine.com/listen or Mixlr.com/MaineMariners.

The Mariners, proud ECHL affiliates of the Boston Bruins, complete their homestand with a pair of game this weekend against the Trois-Rivieres Lions on Friday, November 12th and Sunday, November 14th. Friday is the annual “Military Appreciation Night,” presented by Martin’s Point Health Care and features specialty camouflage jerseys and a USA cap giveaway, sponsored by Bath Iron Works. The jerseys will be auctioned through the Handbid App and a postgame family skate is available for military families. Game time is 7:15 PM. On Sunday, it’s a Thanksgiving Food Drive presented by News Center Maine, as the Mariners collect non-perishable Thanksgiving food items for Good Shepherd Food Bank. Individual tickets can be purchased online at MarinersOfMaine.com or by visiting the Trusted Choice Box Office inside the Cross Insurance Arena.