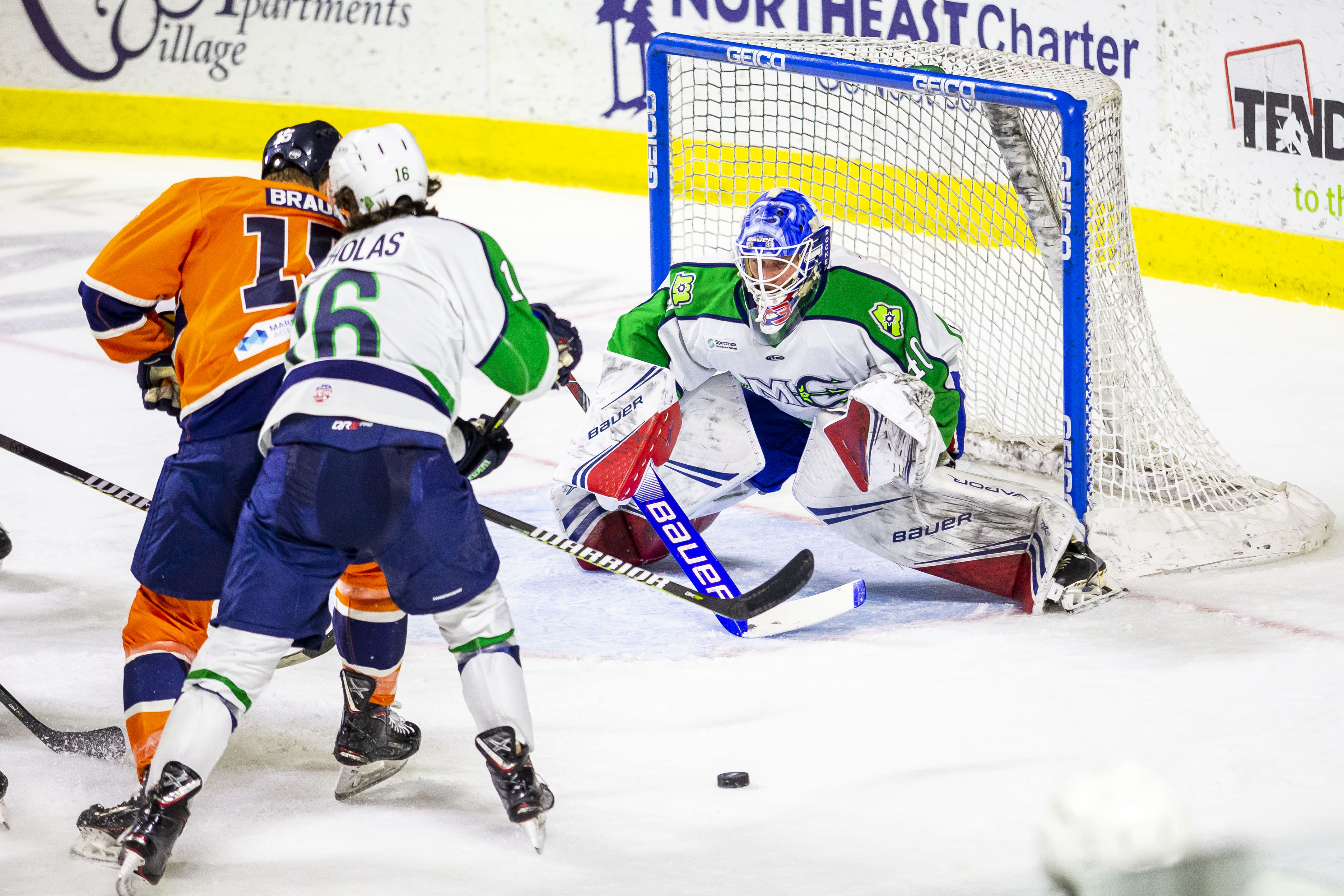 PORTLAND, ME – February 7, 2020 – On January 17th, Mariners netminder Connor LaCouvee allowed seven goals in a 7-6 OT loss in Brampton. In his five starts since then, he’s allowed a total of four, winning each start, and cracking the ECHL’s top ten in goals-against average. On Friday night, LaCouvee stopped 45 of 46 Worcester Railers shots, leading the Mariners to a 2-1 win, their fifth in a row. With the win, the Mariners also claimed sole possession of third place in the North Division.

“It was definitely a mental grind,” said Mariners Head Coach Riley Armstrong, in regards to the tight-checking game. “It was a tough game for us to play tonight, they played hard and Worcester played hard as well.”

The Mariners started slow, outshot 11-3 early in the game, but Connor LaCouvee and the Mariners penalty kill kept the game scoreless, including dispatching a 5-on-3 against. With just over five minutes to go, Ryan Culkin spotted Dillan Fox behind the Railers defense and sprung him for a breakaway, on which Fox beat the blocker side of Evan Buitenhuis to give Maine a 1-0 lead. For Fox, it gave him a team-leading 20 goals on the season and a four game streak.

The second period took a similar pattern as the first, and at the 13:28 mark, Morgan Adams-Moisan made it a 2-0 game, when his wrister from the left wing popped Buitenhuis’ water bottle off the top of the net. Linemates Brian Hart and Ryan Ferrill helped set up the goal. Worcester took back-to-back penalties at 16:56 and 17:19 of the period, giving the Mariners a 5-on-3, which they couldn’t convert. The score remained 2-0 at the end of 40 minutes.

Worcester defenseman Justin Murray scored his first professional goal at 5:36 of the third to get the Railers on the board, as his shot from the top of the left circle beat a screened LaCouvee. From there, the Railers pushed hard, totaling 19 third period shots in an effort to even the score. With 3:16 remaining, Ryan Ferrill took a double-minor penalty for high-sticking, and Ryan Culkin followed at 19:28 with a trip, giving the Railers a 6-on-3 advantage when they pulled Buitenhuis. LaCouvee and the Mariners were able to hold the one-goal lead to earn their fifth win in a row.

LaCouvee’s 45 saves is a new season high for a Mariners netminder, topping Tom McCollum’s 44 from October 19th in Reading. It was his 16th win of the season, and fifth victorious start in a row. Evan Buitenhuis suffered his league-leading 17th loss, making 25 stops.

“We’re playing really well right now,” LaCouvee said. “Sometimes when you’re playing a team that you’re a couple points higher than in the standings, you might have a tendency to let off but I think it’s huge to win this game and solidify our position and keep working towards climbing the ladder.”

The Mariners continue the “3kend,” sponsored by Three Dollar Deweys tomorrow, welcoming in the Brampton Beast at 6 PM, looking to widen their third place lead. It’s Pride Night with EqualityMaine, including a sunglasses giveaway for the first 2,000 fans in attendance. On Sunday the Mariners host Brampton once again for the “Underwear Toss,” with fans encouraged to throw new packages of underwear onto the ice after the first Mariners goal to benefit Preble Street Teen Services.