PORTLAND, ME – February 7, 2019 – The Mariners will be getting a goaltender back, hours after losing Brandon Halverson to a call-up. Connor LaCouvee is on his way back to Maine after agreeing to a one-year two-way AHL contract with the Laval Rocket today.

LaCouvee, 24, signed with the Mariners in July, becoming the first goaltender on the roster. Starting the season as the third-string goaltender behind Halverson and Chris Nell, LaCouvee made his professional debut in relief on October 20th in Worcester, and then defeated Newfoundland the following afternoon, making 32 saves in a 4-2 win – the first in franchise history. LaCouvee got the win in his next start three days later against Manchester and was loaned to the AHL’s Utica Comets on October 29th.

While under a two-way AHL contract with Laval, the Mariners retain LaCouvee’s ECHL rights. With the Mariners, LaCouvee has posted a record of 4-2-0-0, a 3.18 GAA, and a .921 SV%. His last start with Maine came on December 22nd when he made 45 saves in a win at Manchester.

The Mariners play three consecutive home games this weekend, which they are branding the “#3kend.” “Honor Flight Maine Night” presented by News Center Maine is Friday against the Cincinnati Cyclones at 7:15 PM. It’s also a 1-2-3 Friday with $1 hot dogs, $2 popcorn, and $3 Bud Lights through the start of the 2nd period. EqualityMaine Pride night is Saturday against the Greenville Swamp Rabbits at 6:00 PM, with a T-Shirt giveaway to the first 2,000 fans. Sunday is matinee against the Wheeling Nailers at 3:00 PM, featuring a postgame skate with the team, sponsored by Redbank Village. Fans must bring their own skates and those under the age of 18 will need a helmet. Any fans who attend all three games and check in at the Promotions Port are eligible to win a Mariners prize pack. General admission tickets can be purchased HERE or by visiting or calling the Trusted Choice Box Office: 207-775-3458. 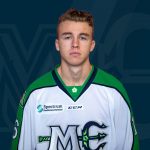