JACKSONVILLE, FL – November 16, 2021 – With the Mariners short two key forwards for their Tuesday morning road trip-opener in Jacksonville, they were looking for someone to step up. Pascal Laberge was the player who did, scoring two of Maine’s three goals, including the game-winner, in a 3-1 victory over the Icemen at Vystar Veterans Memorial Arena.

The home team struck first at 9:02 of the opening period when Icemen defenseman Kyle McKenzie intercepted a Mariners clearing attempt and ripped one past Jeremy Brodeur from just beyond the circles for an unassisted goal. The Mariners used their penalty kill to gain momentum, and set out on a 3-on-2 shorthanded rush in the late stages of the period. Nick Master fed Laberge, who beat Icemen goaltender Tyler Wall upstairs to tie it up at 15:12 of the opening frame.

It remained a 1-1 tie into the final minutes of the second period as well, when Laberge struck again. Linemate Justin Brazeau took a feed from defenseman Michael Kim and found Laberge inside the right wing circle, who slid one between the pads of Wall to put the Mariners back in front. Laberge has scored goals in three straight games and has a total of four in that span. Brodeur stopped all 11 Icemen shots in the middle frame.

In the third, Brendan Robbins added an empty net goal at 18:18 to seal the 3-1 win. Mathew Santos picked up an assist on Robbins’ first goal as a Mariner. Brodeur made a total of 22 saves to earn his 4th win. Wall stopped 18 of 20 in the loss.

The Mariners have won-back-to back games for the first time this season and now have a three game point streak. They improved to 4-3-1-0 on the season with Tuesday’s win.

The Mariners continue their series with Jacksonville on Wednesday night with a 7:00 PM faceoff. After their Florida trip, they’ll return home for a pair of games around Thanksgiving on November 24th and 26th. They host the Worcester Railers on Wednesday the 24th at 7:00 PM as the VIP Rivalry Cup continues. The Newfoundland Growlers come to town on the 26th for a 7:15 PM faceoff and Marvel Super Hero™ Night, which will feature Black Panther specialty jerseys. Individual tickets can be purchased online at MarinersOfMaine.com or by visiting the Trusted Choice Box Office inside the Cross Insurance Arena. 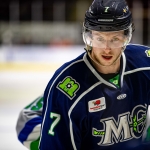 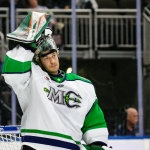