ST. JOHN’S, NL – February 19, 2020 – The Mariners built a 3-1 first period lead on Wednesday night at the Mile One Centre and never looked back, on their way to their third straight road victory over the Newfoundland Growlers. Alex Kile scored two goals in the 5-2 final, while Conner Bleackley and Sean Day each chipped in two points. The Mariners reclaimed sole possession of third place in the North Division playoff race, jumping two points ahead of the idle Brampton Beast with their 30th win of the season.

For the second night in a row, the Growlers scored first. After a high-sticking penalty to Lewis Zerter-Gossage, Brady Ferguson found space in the slot and finished a feed from Aaron Luchuk past Connor LaCouvee’s stick side at 7:44 of the first period. Conner Bleackley evened the score at 10:49, lifting a shot over Growlers goaltender Maksim Zhukov from the dot inside the right faceoff circle, assisted by Greg Chase and Michael McNicholas. Maine then took the lead when Zach Tolkinen attempted the infamous “Michigan move,” looking to tuck the puck into the top shelf from behind the net. Tokinen’s try didn’t work out, but the puck popped to Morgan Adams, who gloved it down and slid it to Dillan Fox, who jammed it inside the post past Zhukov to make it 2-1. The goal was reviewed and upheld. After back-to-back Growlers penalties at 16:40 and 16:52, Alex Kile ripped home a 5-on-3 wrister to stretch the lead to 3-1. The first period saw 30 combined shots, 16-14 in favor of the Growlers.

Parker Gahagen replaced Zhukov in the Growlers net to start the 2nd period, which saw much lower shot totals: just 6-3 in favor of the Growlers. The Mariners killed three penalties as the score remained 3-1.

At 7:49 of the third period, former Mariner Alec Baer, playing in his second game as a Growler, picked up a redirected point shot and slid it past the pad of LaCouvee to bring the margin back to one. Despite a Dillan Fox high-sticking penalty, the Mariners answered back to reclaim their two goal lead. Just as Fox stepped back onto the ice, Terrence Wallin set up Kile for his second goal of the night and an insurance tally at 14:19. Wallin later went off for interference, but the Mariners also killed it and defenseman Ryan Culkin skated in on a breakaway with an empty net to seal the game at 19:01.

LaCouvee earned his 18th win with 34 saves, while Zhukov suffered the loss, making 11 saves on 14 first period shots. The Growlers loss marks the first time in their franchise history they’ve dropped three consecutive home games, ironically after winning an ECHL record 19 in a row at home.

The Mariners have one more stop on their road trip – Saturday night in Glens Falls against the Adirondack Thunder at 7 PM. The Mariners will be back at the Cross Insurance Arena on Sunday, February 23rd for “Miracle Night,” celebrating the 40th anniversary of the Miracle on Ice against Newfoundland at 3 PM. The Mariners will be wearing Team USA inspired jerseys, which will go up for auction starting January 12th on the Handbid App. There will also be a postgame screening of the Disney movie, Miracle (2004) on the video board. Groups of 10 or more can get discounted tickets to all games by calling 833-GO-MAINE. Individual tickets can be purchased at MarinersOfMaine.com, at the Trusted Choice Box Office inside the Cross Insurance Arena, or by calling 207-775-3458. All Saturday and Sunday home games feature the Family Four Pack – four tickets, four food and drink vouchers, and four Mariners beverage koozies, starting at $80, and must be purchased in advance. 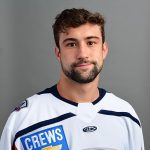