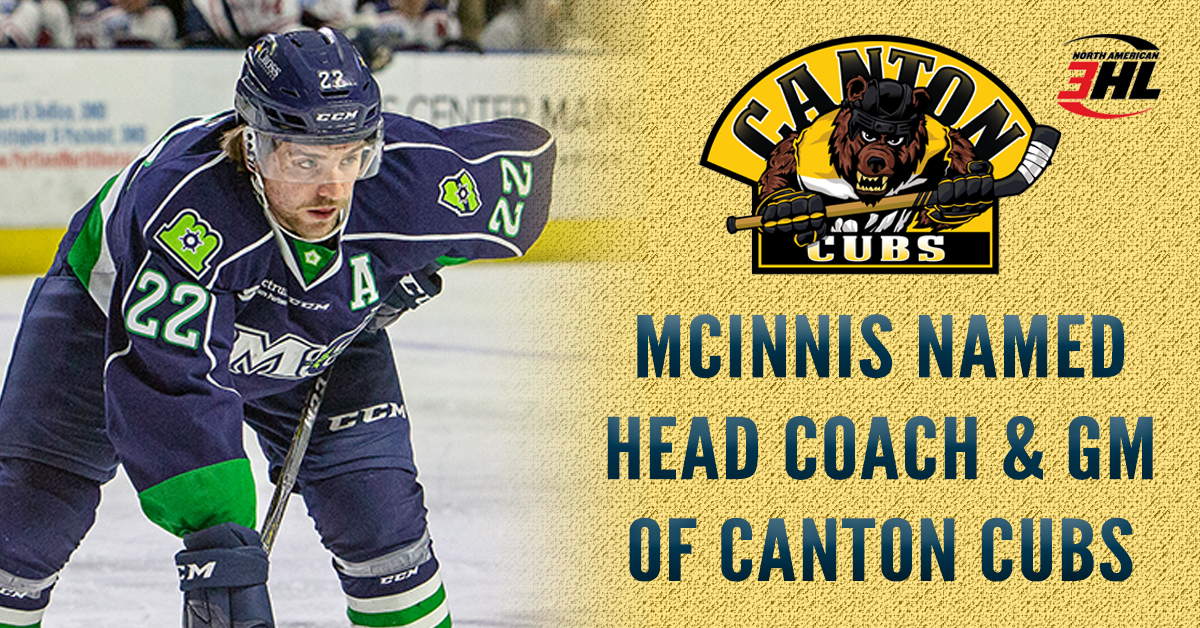 PORTLAND, ME – May 30, 2019 – The Canton Cubs (Canton, MA) of the NA3HL, named former Mariners forward Johnny McInnis as their new Head Coach and General Manager on Wednesday. The 29-year-old Boston native finished up a five year professional playing career in 2018-19, playing 24 games with the Mariners. McInnis will carry over the close proximity from the end of his playing career, into the beginning of his coaching career. Canton is 20 minutes from his home town and the Cubs play in a rink he played in growing up.

“I’ve always had the mentality that I’m playing forever,” McInnis said. “But at my age you’ve got to start thinking about what to do next and I just wanted to stay involved with the game somehow if I could and to be able to do it in New England is icing on the cake.”

The Canton Cubs franchise has just relocated and rebranded for 2019-20, having moved from Cape Cod, MA where they had been known as the Cape Cod Islanders since 2011. The “Cubs” name is not new however, as the franchise was originally the “Cape Cod Cubs” in its first three seasons of existence from 2008-2011.

“We hit it off right away,” McInnis said in reference to the interview process with the Cubs. “I wasn’t sure how serious I was going to be about going into coaching but when this opportunity popped up, I jumped at it. I wouldn’t have taken the job if I didn’t think I could be successful at it. It’s not going to be easy but nothing is so I’m looking forward to it.”

The NA3HL, short for North American 3 Hockey League, is a Tier III Junior hockey league in the United States, operating under the leadership of the NAHL (North American Hockey League). The NA3HL is comprised of 36 teams, making up six divisions. The Canton Cubs compete in the Coastal Division, along with the Lewiston/Auburn Nordiques, Northeast Generals, New England Stars, Long Beach Sharks, and Maine Wild (Biddeford). In 2018-19, the Cape Cod Islanders finished in last place, with a record of 8-37-2-0.

McInnis turned pro in in 2014 after a four year NCAA DI career at Minnesota State-Mankato. He was captain in his senior season. In April of 2014, McInnis signed an ATO with the Lake Erie Monsters (AHL), and appeared in two games. The following fall he signed with the Florida Everblades, and would spend the remainder of his playing career bouncing around the ECHL. His journey took him to Orlando, Utah, Reading, South Carolina, Indy, Allen, and finally Maine. The forward was traded six times and claimed off waivers to make it a lucky seven transfers. The final one came in January of 2019, when the Allen Americans dealt him to the Mariners in exchange for forward Justin Breton. For Mariners head coach Riley Armstrong, the addition of McInnis was about more than just his on-ice performance.

“Johnny was a welcomed addition to our roster in Maine last season to help with the development of our younger players,” said Armstrong. “He was a voice in our locker room and an extremely hard worker on the ice scoring some big goals for us. Johnny will be a good coach for the way he will be able to develop players and work with the younger generation. I would like to thank Johnny for coming to Maine and congratulate him on his playing career.”

With the Mariners, McInnis played 24 games, scoring three goals with eight assists. All 11 points came in a very productive 13 game span between February 10th and March 8th. Perhaps his best performance as a Mariner came on February 24th, 2019 in a shootout win at home against the Worcester Railers. McInnis had an assist, the game-tying goal in the third period, and also scored in the shootout.

McInnis, who majored in communications and history at Mankato, said he knew he wanted to eventually get into coaching as early as college, and that his interactions with coaches along the way is the main reason why.

“I’ve always had a good relationship with assistant coaches and head coaches and I think I’ve gathered traits from each one” he said. So what did he pick up from Riley Armstrong?

“Riley gets to know his players, he does his homework on his players, and he knows how to interact with them. He knows when to push the gas, when to lay off, when to lean on guys, and when to leave them alone. Some coaches don’t value the relationship with their guys but you can tell that Riley genuinely cares about every guy that comes through the room. That’s the culture that I want to bring to a team as coach.” 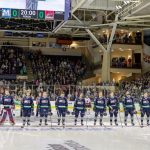