WORCESTER, MA – March 6, 2022 – Keltie Jeri-Leon’s first career hat trick, all in the third period, led the Maine Mariners to a 5-3 win and a road sweep of the Worcester Railers on Sunday afternoon at the DCU Center. The Mariners extended their lead over the Railers for the fourth and final playoff spot in the North Division.

The Mariners struck first, with the only goal of the opening frame. Cam Askew had a puck knocked off his stick in the high slot, right back to defenseman Marc-Olivier Duquette who wound up and blasted one past the glove side of Railers netminder Colten Ellis at 12:29 of the first.

As they did on Saturday night, the Railers picked up their game in the 2nd period. Myles McGurty fed Brent Beaudoin through the slot on a 2-on-1 to tie the game just 3:27 into the middle frame. It remained 1-1 until the 14:27 mark when Anthony Repaci skated in on a shorthanded breakaway and trickled one between the pads of Stefanos Lekkas. The Mariners struck back on the same power play, however, as Pat Shea answered 34 seconds later, looping a rebound over Ellis from an Andrew Peski shot. The game was tied 2-2 heading to the third.

Jeri-Leon took over in the third period, breaking the tie at 3:31, skating down the right wing and beating Ellis glove side, and using Liam Folkes as a decoy. At 16:30 of the period, Jeri-Leon added an insurance goal, driving the net and tipping in a pass from Nate Kallen. Worcester pulled Ellis and got one back with 53 seconds left when Cole Coskey’s wrister from the right circle beat Lekkas, but Jeri-Leon found the empty net from just outside the Mariners blue line at 19:41.

It was Maine’s sixth hat trick of the year and first on the road. It was also the fifth against the Railers, joining Eduards Tralmaks (Oct. 22nd), Alex-Olivier Voyer (Nov. 24), Nick Master (Dec. 10), and Alex Kile (Dec. 29). Lekkas made 33 saves to earn his second win in as many days, while Ellis stopped 21 in the losing effort.

The Mariners (24-21-4-2) and Railers have split the first 12 games of the VIP Rivalry Cup with six wins a piece. The teams will face off again on Wednesday night, with the venue shifting to the Cross Insurance Arena in Portland. It’s “Reading Night” at 7 PM with free admission for all participants of the 2021 summer “Read with ME” program. Tickets for all home games can be purchased online at MarinersOfMaine.com/tickets or by visiting the Trusted Choice Box Office inside the Cross Insurance Arena. 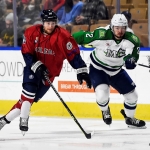 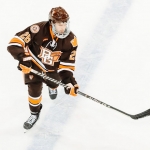