PORTLAND, ME – December 7, 2018 – In a game that saw several lead changes and momentum swings, the Mariners prevailed 5-4 in a shootout over the Adirondack Thunder on Friday night at the Cross Insurance Arena. Ryan Gropp led the way offensively with a goal and an assist in his Mariners home debut, plus the lone goal of the shootout. Brandon Halverson turned aside 47 of 51 Thunder shots.

The Mariners scored the only goal of the first period when Michael McNicholas cashed in a Sean Day power play feed at 5:55. The Thunder were returning a player to the ice at the end of a 5-on-3 and Day was able to move between the circles and feed McNicholas who lifted a shot over a sprawling Alex Sakellaropoulos. Brandon Halverson stopped all 15 shots he faced in the first.

Adirondack came hard in the second period and tied it quickly when John Edwardh collected a free puck from behind the pads of Halverson at 1:22. Kevin Lough picked up his first of three assists on the night with the shot from the point to produce the goal. Ten seconds later, the Mariners took the lead back off a Ryan Ferrill faceoff win that Justin Breton picked up and sniped past Sakellaropoulos. The Thunder tied it again at 6:11 on a James Henry wrister, leading a two-on-one with Peter MacArthur. Adirondack went to the power play and grabbed their first lead at 8:19 when Shane Conacher rocketed one-timer past Halverson from above the left wing circle. Maine finished the wild second period with its own power play tally with 16 seconds left as McNicholas found Ryan Gropp across the goal mouth for a shot under the cross bar.

At 7:05 of the third, Joe Kalisz came out of the penalty box and chased after his own rebound behind the Adirondack net. Gropp pulled the puck out from below the goal line and found Riley Bourbonnais streaking down the slot to give the Mariners a 4-3 lead. Kalisz registered his first ECHL point with the secondary assist. The 4-3 lead held up until 18:16 when with the extra attacker out for Adirondack, Edwardh struck again for his second of the game and fourth at the Cross Insurance Arena this season (of his six total goals).

Each team had good opportunities through a scoreless three on three overtime and registered four shots apiece. In the shootout, Gropp beat Sakellaropoulos with a stick-side wrister, and no one else would find the back of the net. Halverson stopped Edwardh and Cullen Bradshaw before Peter MacArthur lost the puck in the final attempt for the Thunder, ending the game. The Mariners allowed a season high 51 shots as Halverson earned his 7th win. Sakellaropoulos made 32 saves in the loss. The Mariners win marked their first against Adirondack in franchise history. They’ve also collected points in eight of their last nine home games, dating back to October 21st.

The Mariners are back home Sunday vs. Worcester at 3:00 PM for “Night of Champions” presented by Spectrum Healthcare Partners. Fans are asked to continue bring non-perishable food donations to both games to benefit Preble Street. Tickets can be purchased at MarinersOfMaine.com or by calling 207-775-3458. 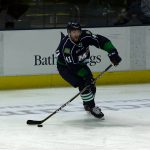