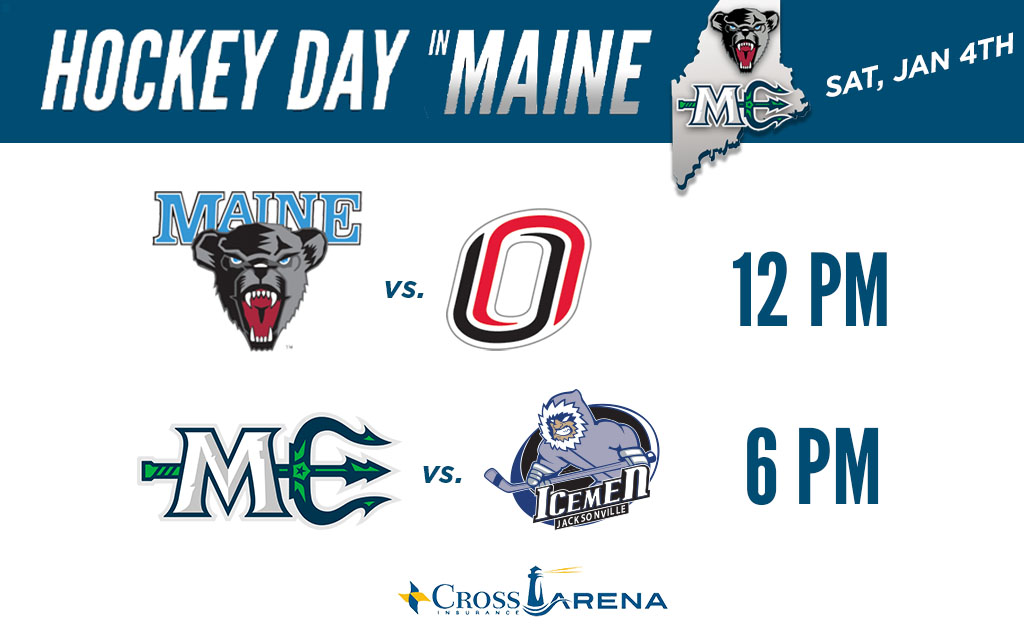 PORTLAND, ME – December 17, 2019 – “Hockey Day in Maine” takes place on Saturday, January 4th, 2020 at the Cross Insurance Arena and is a celebration of the great sport of hockey and the fans in Maine that support it in diehard fashion. The Mariners, University of Maine, and the Cross Insurance Arena have come together to offer special deals for fans across the state, plus are offering the ultimate prize package to the biggest hockey fan in Maine.

The Mariners will host the Jacksonville Icemen at 6:00 PM. The Icemen, who play in the South Division are making their first ever visit to Portland, as the two teams play their inaugural head-to-head meeting the night before. The Mariners theme is also “Witchcraft and Wizardry Night” for the game.

The Mariners and Cross Insurance Arena are also seeking the “biggest hockey fan in Maine,” who will win the ultimate hockey prize pack. Through Friday, December 20th, fans can enter to win (no purchase necessary) at MarinersOfMaine.com HERE, by describing why they are the biggest hockey fan in Maine, and attaching a photo. The winning submission will receive four premium seats to the University of Maine game on January 4th, four ice row seats to the Mariners game, a benchwarmers experience at the Mariners game, a photo on the ice after the game, four Mariners gift bags, Hockey Day in Maine pucks, can koozies, two team signed sticks – one from the Black Bears and one from the Mariners, and an additional University of Maine prize pack. Submissions must be received by 11:59 PM on December 20th.

Family four packs are also available for the January 4th Mariners game and all Saturday and Sunday home games this season. They include four tickets to the game, four food and drink vouchers, and four Mariners can koozies, for as low as $80. Family four packs can be purchased HERE and must be bought advance of game day.

The Mariners are back home immediately following Christmas on December 26th and 27th to host the Adirondack Thunder and Reading Royals. Thursday, December 26th is a 7 PM faceoff and is Nickelodeon Takeover Night featuring Teenage Mutant Ninja Turtles Specialty Jerseys. The puck drops at 7:15 PM on Friday, December 27th and is STEM Night – focusing on science, technology, engineering, and mathematics. It’s also a 1-2-3 Friday, featuring $1 Aquafina water, $2 Pepsi products, and $3 Bud Lights through the start of the 2nd period. Both games also feature the “Skate and Scarf” package, where fans can get a ticket to the game, a Mariners scarf, and a pre-game skate with Beacon the Puffin plus a snack buffet. Only 100 packages are available for each game.