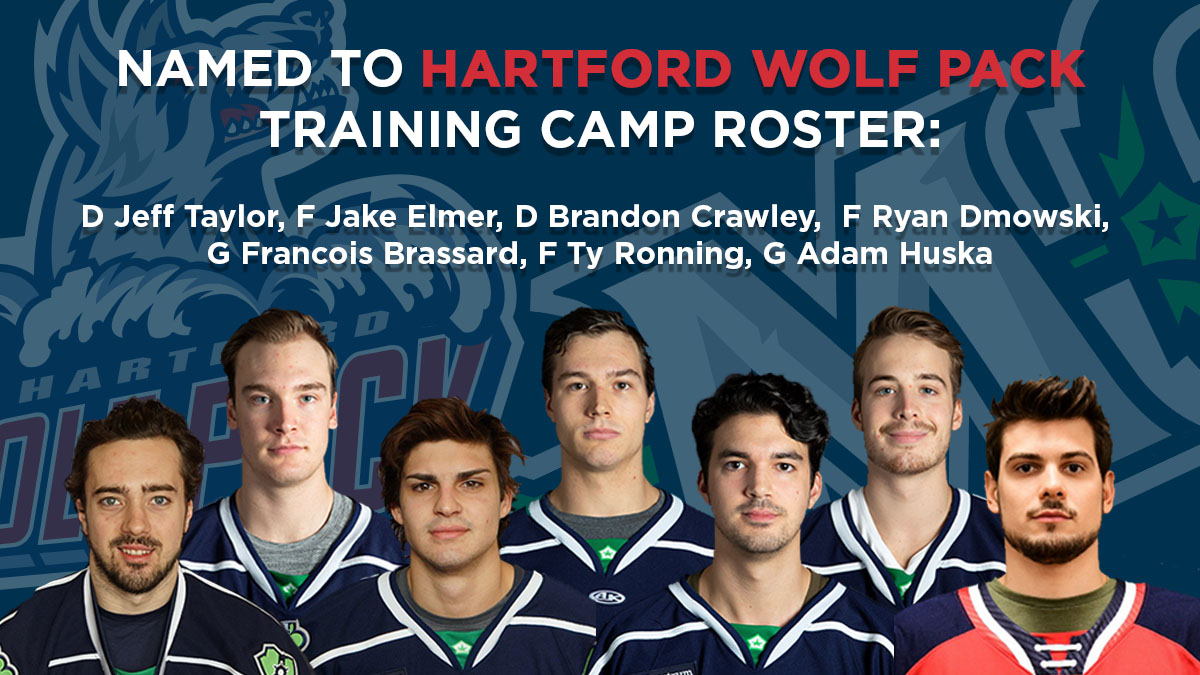 PORTLAND, ME – January 25, 2021 – Seven former Mariners players were included in the Hartford Wolf Pack 2021 Training Camp roster, which was released on Monday. Forwards Ty Ronning, Jake Elmer, Ryan Dmowski, defensemen Brandon Crawley and Jeff Taylor, and goaltenders Francois Brassard and Adam Huska were all named to the training camp roster of the Mariners’ AHL affiliate. The Wolf Pack are slated to begin a 24-game schedule on February 7th.

All seven players played for the Mariners in 2019-20, with all but Dmowski and Huska spending the majority of the season in Maine. Six of the seven were under contract with either the New York Rangers or Wolf Pack last season, with the exception of Brassard.

Ty Ronning (F), a 7th round draft pick of the Rangers in 2016, has spent parts of the last two seasons as a Mariner. He became an instant fan favorite when he scored a hat trick and notched five points in his ECHL debut on November 24th, 2018 against the Manchester Monarchs at the Cross Insurance Arena. Last season, Ronning scored 11 goals and added 13 assists in 28 games for Maine. He played 23 games in Hartford as well, with one goal and two assists. Ronning has 61 career AHL games played and 53 in the ECHL – all with the Mariners and Wolf Pack.

Jake Elmer (F) was a rookie last season and was the Mariners All-Star representative. In 36 games, Elmer scored 12 goals with 11 assists. Strangely, Elmer did almost all of his damage against the Adirondack Thunder, scoring nine goals against them, including two hat tricks (November 9th and December 6th) and an additional two goal game (December 7th). Elmer skated in two games for Hartford in 2019-20, on top of five appearances in 2018-19, after aging out of the Western Hockey League, where he had a breakout season for the Lethbridge Hurricanes (81 points in 68 games).

Ryan Dmowski (F), also a rookie in 2019-20, began the season in Maine, but spent most of the year in the AHL. In 12 contests for the Mariners, Dmowski had three goals and four assists. He suited up in 31 games for the Wolf Pack, with four goals and two assists. Like Elmer, Dmowski spent time in Hartford the previous season as well, playing ten AHL games in 18-19. Dmowski came out of the college ranks to join the Wolf Pack, finishing up at the University of Massachusetts-Lowell.

Brandon Crawley (D), who is under contract with the Rangers, had a whirlwind 2019-20 season, which began in Maine and ended in the Stanley Cup playoffs. The 2017 fourth round pick played 38 games for the Mariners last season after two full years in Hartford. For Maine, Crawley had two goals and 10 assists. After skating in nine games for the Wolf Pack, Crawley found himself on the Rangers roster for the Stanley Cup Qualifier round when the NHL resumed its season in August. Crawley did not appear in a game for the Rangers as they were swept out of the postseason by Carolina. Crawley was also in training camp with the Rangers prior to the start of this NHL season.

Jeff Taylor (D) has spent time in the AHL every season since 2016-17, but played most of 2019-20 with Maine. In 23 games for the Mariners last season – while under contract with the Wolf Pack –  he had two goals and six assists. Taylor got into ten games with Hartford as well. He spent the previous three seasons with the Pittsburgh Penguins organization, who drafted him in 2014 (round seven). Taylor signed with the Jacksonville Icemen of the ECHL in December, and has been loaned to the Wolf Pack’s training camp roster.

Francois Brassard (G) hopes to make his AHL debut after spending parts of the last two seasons in Maine. Originally a 2012 draft pick (round six) of the Ottawa Senators, Brassard didn’t make his professional debut until the end of the 2018-19 season with the Mariners. He was the primary back-up netminder for Maine in all of 2019-20, posting a 6-6-1-0 record with a 2.76 GAA and a .908 save percentage in 14 appearances. Brassard’s journey brought him back to the Senators organization for their 2021 training camp, but he lands in Hartford for his next opportunity.

Adam Huska (G) was just briefly a Mariner in 2019-20, but would have potentially spent more time in Portland had COVID-19 not cut the season short. His first assignment to Maine camp in late January when he played a pair of games against the Worcester Railers: an 8-1 home win followed by a 2-1 road loss. He joined the Mariners again for the final game of the season – a 3-2 home loss to Norfolk. Huska’s numbers were solid, with a GAA of 2.04 and a save percentage of .943. In Hartford, where Huska spent most of 2019-20, he posted a record of 11-8-9 with a 3.03 GAA and a .894 SV%. Like Crawley, Huska made the 2020 Stanley Cup Qualifier roster as well as the Rangers training camp roster three weeks ago.

Three other former Mariners were named to 2021 AHL training camp rosters. Goaltenders Connor LaCouvee and Chris Nell (2018-19 Mariner) are both on the Tucson Roadrunners roster. Defenseman Sean Day, who signed with the Tampa Bay Lightning in the summer, is on the roster of their AHL affiliate, the Syracuse Crunch. 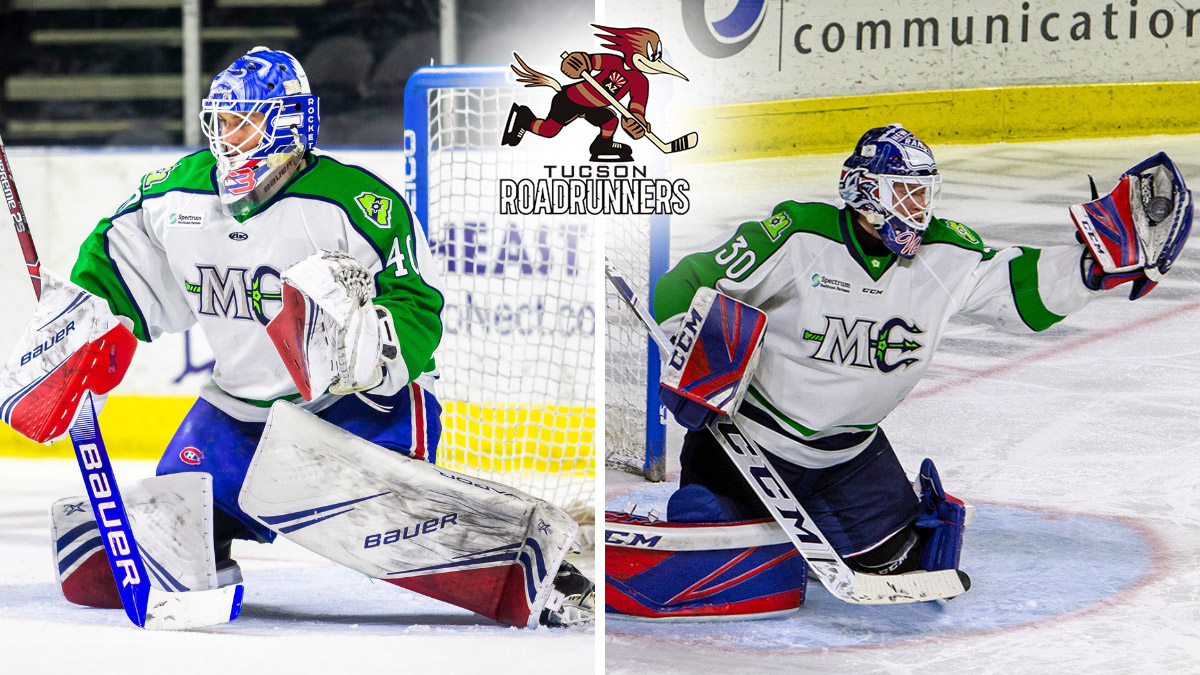 The AHL is beginning a shortened season on February 5th, with teams playing between 24 and 40 games. The Wolf Pack will play all of their games against the Bridgeport Sound Tigers and Providence Bruins in a modified, three team Atlantic Division. Their first game is February 7th at home against Bridgeport.

The Mariners are one of 12 ECHL teams not participating in the 2020-21 season, and will return to play for the 2021-22 season. Season ticket packages (full, half, and 12-game mini plans), along with 10-ticket flex plans, are now on sale, starting at $170. Fans can call 833-GO-MAINE or email mariners-sales@comcastspectacor.com to contact a sales representative. The Mariners online merchandise store has also re-opened, with the latest in Mariners merchandise, at MarinersOfMaine.com/shop.