PORTLAND, ME – January 17, 2019 – Wednesday’s night’s game at the Cross Insurance Arena was all about the men between the pipes. Newfoundland’s Michael Garteig outdueled Maine’s Brandon Halverson by collecting a shutout, but Halverson stole the spotlight with the save of the game and an appearance on ESPN. His flashy pad save in the third period on Growlers forward Zach O’Brien was named to the #2 spot on SportsCenter’s Top 10 Plays for Wednesday night.

The highlight came with just under four minutes remaining in regulation and the Mariners trailing the Growlers, 1-0. Newfoundland forward Hunter Elynuik spun at the right circle and backhanded a puck toward the goal, looking for a redirect. Marcus Power, standing in front of the net, touched it over to Zach O’Brien to the right of Halverson for what appeared to be a sure goal. Halverson, with lightning quick reflexes, pushed across to get his right leg-pad on the shot, and then smothered O’Brien’s stuff attempt to stop play.

Halverson had just returned from a brief one-game call up to AHL Hartford, and was starting his first game with the Mariners since January 5th. The 6’4 goaltender has been fantastic this season for the Mariners, with 13 wins, a 2.67 GAA, and a .924 save percentage, which ranks fourth among all ECHL goaltenders. He’s also made the fifth most saves (754). He made 26 stops on 27 shots on Wednesday to take the tough luck loss.

The Mariners are home tomorrow night at 7:15 PM against the Manchester Monarchs for the final game before the All-Star break. Big Moose Harley-Davidson will be displaying motorcycles at both games to preview the Maine Motorsports Xtreme Ice Racing Championships, happening at the Cross Insurance Arena on Saturday. Friday is also Bath Savings Night and a “1-2-3 Night”: $1 hot dogs, $2 popcorn, and $3 Bud Lights through the start of the 2nd period. Tickets can be purchased HERE or by visiting or calling the Trusted Choice Box Office: 207-775-3458. 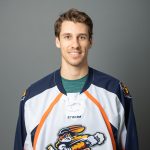