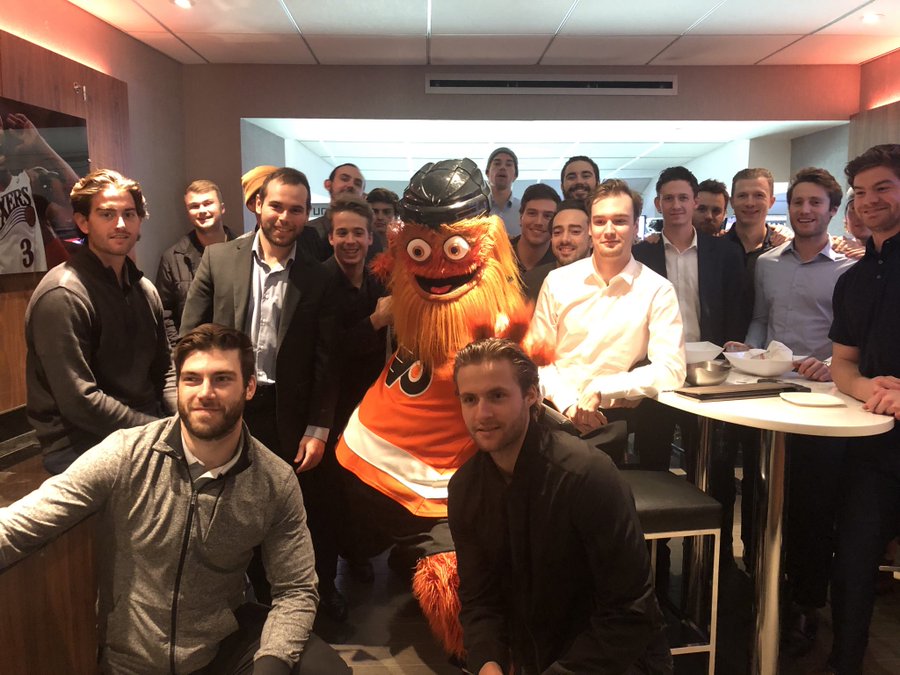 PORTLAND, ME – November 6, 2019 – Gritty, the mascot of the Philadelphia Flyers and world famous viral sensation, is coming to the Mariners vs. Reading Royals game next Monday, November 11th at the Cross Insurance Arena. Gritty has ties to both teams, with the Royals being the Flyers’ ECHL affiliate and the Mariners and Flyers sharing ownership under Comcast Spectacor. Gritty will participate in a variety of in-game events and fan engagement throughout the night.

Gritty will take the ice along with Beacon during pregame and drop the ceremonial puck. During the first period, he’ll help with the lucky row” and “seat upgrade” promotions. At the first intermission, Gritty will help “officiate” the Body Zorbs game, then return to the concourse for more photo opportunities. During the second period, Gritty will assist with T-shirt toss and roam the stands greeting fans. He will then, of course, assist with Toss-a-Tomato, Win Some Dough during the second intermission, before returning to the concourse one last time. In the third period, Gritty will help award the “awkward autograph item of the game.”

Gritty was introduced as the mascot of the Flyers prior to the 2018-19 season, quickly becoming a viral sensation in hockey world and beyond. With a unique look and personality, Gritty has appealed to fans of all ages, becoming by far the most widely-adored mascot in hockey. The NHL Players Association voted Gritty as the league’s best mascot in March of 2019.

Gritty has a massive following on social media, with more than 220,000 followers on Instagram and over 270,000 on Twitter. He’s appeared in many viral photos and videos since bursting onto the scene.

Limited Gritty packages are still available HERE, where fans can also purchase individual game tickets. The puck drops at 7:00 PM on Monday, doors opening at 5:45 PM for season ticket holders and 6:00 PM for the general public.

This Saturday night is the first of two Military Appreciation celebrations, presented by Martin’s Point in partnership with Bath Iron Works. The Mariners host Adirondack at 6 PM, and the first 2,000 fans through the door will receive an exclusive lobster winter beanie, sponsored by Martin’s Point. It’s also a “Family Four Pack” game: families of four can get four tickets, four food and drink vouchers, and four Mariners can koozies for as low as $80. Family four packs must be purchased in advance. For more information and to purchase tickets, go to MarinersOfMaine.com, call 833-GO-MAINE, or visit the Mariners front office at 94 Free St. in Portland.

TOM MCCOLLUM LAUNCHES “GOALIES WHO GIVE”
Scroll to top