WORCESTER, MA – March 22, 2019 – In what was their final regular season trip to Worcester in 2018-19, the Mariners topped the Railers 2-1 in OT, coming from behind in the third yet again Friday night at the DCU Center. Greg Chase scored both Mariners goals including the overtime winner, the sixth OT or shootout win by the Mariners over the Railers this season.

To open the scoring at 3:43 of the first, Railers defenseman Tyler Mueller led a 2-on-1 and wristed home his 2nd goal of the season past the glove of Chris Nell. After a sluggish start, the Mariners got going in the first, but trailed 1-0, with a 12-9 shot disadvantage after one.

The second period was a little tighter, and neither team found the net. The period was highlighted by a pair of fights, each by Yanick Turcotte on the Railers side, as he dropped the gloves with Ryan Ferrill and later Derek Pratt. Second period shot totals were 8-6 in favor of the Mariners.

Just over eight minutes into the third, the Mariners finally got even. Blake Kessel fed a pass across the top of the zone to his defense partner, Johnny Coughlin at the left-wing circle. Coughlin gathered in the pass and took a shot that Chase redirected inside the post past Mitch Gillam to make it 1-1. The goal went under video review and was upheld. Coughlin’s assist was the first point of his professional career. Gillam and Nell, who each played strong games, kept things even through the third.

Although Worcester controlled the puck for most of OT, Chase ended the game at the 3:00 mark, when he batted his own rebound out of midair and behind Gillam. Dwyer Tschantz received the lone assist, springing Chase on a two-on-one up the right wing. Chase attemped to pass to Brycen Martin, and batted the blocked feed out of the air and in. Chase’s goals were his team-leading 21st and 22nd of the season. Chris Nell made 30 saves on 31 shots to earn his 14th win of the season. Gillam stopped 28 of 30 in the loss.

The Mariners gained two points on idle Manchester (now ahead by three) and Adirondack (behind by three). They are also now three up on Worcester, which moves into a fourth place tie with Manchester by gaining a point.

The Mariners next will host Manchester at 3:00 PM on Sunday. It’s Country Night presented by 99.9 The Wolf. The first 500 fans will get a bandanna and concert giveaways will be held during the game including Luke Bryan, Florida Georgia Line, and Old Dominion. Tickets can be purchased HERE or by calling the Trusted Choice Box Office at 207-775-3458. 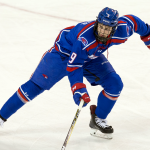 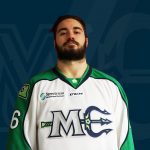 ADAMS-MOISAN EARNS ANOTHER CALL UP
Scroll to top