NORFOLK, VA – November 22, 2019 – Dillan Fox and Ryan Culkin each had four point games as the Mariners dominated the Norfolk Admirals on Friday night at the Norfolk Scope, splitting the first two games of the three game set. The Mariners scored three power play goals while killing all seven Admirals chances, and got a stellar performance from Connor LaCouvee between the pipes.

The first period was marked by special teams as 14 combined penalty minutes were assessed and each team was awarded multiple power plays. After a lot of missed chances and big saves on both sides, the Mariners finally broke through at 14:48 with the man advantage. Ryan Culkin fed Terrence Wallin who found Dillan Fox at the left circle and Fox, trying to pass it through the crease to Ted Hart on the back door, got the credit for the goal when it deflected off an Admiral defender and in. The Mariners outshot Norfolk 12-8 in the first period and held their 1-0 lead.

Around three minutes into the 2nd period, Connor LaCouvee made an incredible save, retreating to his goal crease, sprawling to smother a chance by Sam Povorozniouk, who appeared to have an open net, after the puck took a strange bounce off the end boards. At 6:01 of the period, Terrence Wallin, deflected a Ryan Culkin pass behind Admirals goaltender Roman Durny for Maine’s second straight power play goal. Brandon Crawley notched a secondary assist on the goal. At the 8:10 mark of the third, Morgan Adams-Moisan picked up his first goal of the season, when he stuffed a puck inside the back post after Dillan Fox was denied on the other side. Culkin finished off the scoring in the period when he followed Greg Chase’s rush and blasted home his fourth goal of the season past Durny at 10:40. The Mariners led 4-0 after two periods.

Norfolk got on the board 13:39 into the third when defenseman Johnny Coughlin scored his second goal in as many games, but it was quickly answered by Fox’s second goal of the night at 15:21. Fox fed Alex Kile in the slot, who moved it right back to Fox at the bottom of the left wing circle. The Mariners cashed their third power play goal of the night at 17:20 when Kile blasted a one timer from the right circle past Durney at 17:20 to make it 6-1, reversing the final score from Wednesday.

Each team finished with 28 shots on goal, LaCouvee stopping 27 for his third win. Durny made 22 saves in the loss.

The Mariners finish their series with the Admirals on Saturday night at 7:30 PM in Norfolk. They’ll return home for three games next week – Tuesday at 7 PM against Worcester, Friday at 7:15 PM against the Indy Fuel, and then Saturday at 6 PM against the Newfoundland Growlers. Tuesday is a sensory reduced game for Autism Awareness. Saturday night will feature specialty Aquaman jerseys as part of the league’s partnership with DC Comics. Groups of 10 or more can call 833-GO-MAINE to get tickets at a discounted price. Individual game tickets can be purchased at MarinersOfMaine.com, in person at the Trusted Choice Box Office at the Cross Insurance Arena, or by calling the box office at 207-775-3458. 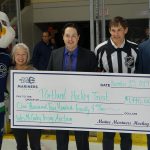