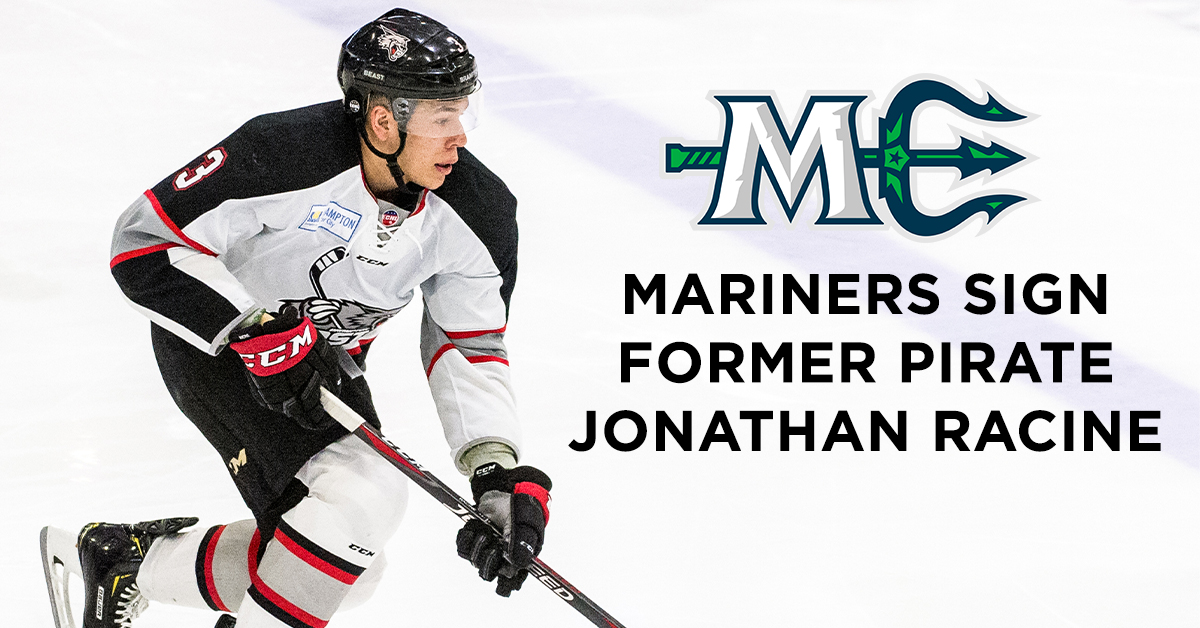 PORTLAND, ME – October 1st 2019 – The Mariners added a key piece to their blue line on Tuesday, announcing the signing of veteran defenseman Jonathan Racine. The signing marks a return to Portland for Racine, who was a member of the 2015-16 Portland Pirates.

Although Racine is just 26 years old, he’s been a pro since the end of the 2012-13 season when he debuted with the AHL’s San Antonio Rampage.  Racine was a third round draft pick of the Florida Panthers in 2011, going 87th overall. In 2013-14, he made his NHL debut, appearing in one game for the Panthers. He would spend the next five years in the AHL, playing for San Antonio, Portland, the St. John’s Ice Caps, Syracuse Crunch, and Ontario Reign from 2013-2018.

For the past two seasons, Racine has played primarily in the ECHL – with the Manchester Monarchs in 2017-18 and the Brampton Beast last season. In his 44 games with the Beast, Racine enjoyed a career year in all three major offensive categories (goals, assists, and points), scoring seven goals with 13 assists. He had never registered more than one goal or eight assists in any of his prior five full professional seasons, although his previous best career season was during his time in Portland (one goal, eight assists in 69 games). Racine also led Brampton’s squad in penalty minutes last season, with 103. In six postseason games, he had three points and 39 penalty minutes.

The 6’2, 194 pound defenseman is a native of Montreal, Quebec. He played four seasons of junior hockey in the QMJHL, with the Shawinigan Cataractes and Moncton Wildcats. Racine won a Memorial Cup with Shawinigan in 2011-12.

Mariners training camp kicks off Wednesday with the first of three sessions this week at Troubh Arena beginning at 10:00 AM. The Mariners will hold an evening practice from 6-7 PM on Tuesday, October 8th at the Cross Insurance Arena that will also include player introductions and a private meet and greet for full season ticket holders following practice. All sessions are free and open to the public. The full training camp roster will be released later today.