GLENS FALLS, NY – December 6, 2019 – Jake Elmer has scored eight goals this season – seven against the Adirondack Thunder. His overtime winner exactly halfway through the extra session on Friday night at the Cool Insuring Arena sealed his second hat trick against the Thunder in less than a month and clinched the Mariners a 5-4 win to start a three game series between Maine and Adirondack.

The opening period was even across the board, with neither team finding the net, each team taking five shots, and each being assessed one penalty. The scoring started to come fast and furious early in the 2nd when Sean Day carried the puck down low and Alex Kile fed Jake Elmer for a backdoor tap in and 1-0 Mariners lead just 45 seconds in. After the Mariners came up empty on a power play, they doubled their lead at 5:33, when Terrence Wallin’s attempted pass deflected off Adirondack defenseman Charlie Curti and past netminder Evan Cormier. At 6:20, they stretched it to 3-0 as Ted Hart followed a Dwyer Tschantz blocked shot and scored his fourth goal of the season. Adirondack’s Jake Linhart got the Thunder on the board at 8:30 when his long point shot beat Connor LaCouvee’s stick side. Just 27 seconds later, Elmer got his second goal of the game when his attempted pass from below the goal line ricocheted off Curti again and over Cormier to make it 4-1. The gap was closed back to two at 16:10 as the Thunder followed up a missed 2-on-1 and a puck deflected off Alex Carrier and over an outstretched LaCouvee, just landing over the goal line. The Mariners took the 4-2 lead into the third.

About six minutes into the third, the Mariners were assessed a minor penalty for two many men on the ice, which led to a Robbie Payne power play goal to close the gap to one. It remained 4-3 until the 15:43 mark, when Payne deflected in Nikita Popugaev’s drive past LaCouvee to even the score. The Mariners were outshot 13-4 in the third, as each team earned a point by forcing OT.

Elmer netted the hat trick goal and simultaneous game-winner at 3:30 of OT when he circled out from below the goal line, working his way between the circles and beating Cormier with a wrister. Michael McNicholas and Brandon Crawley assisted on the game winner. LaCouvee made 27 stops to earn his 4th win while Cormier turned aside 13. It was only Maine’s second all-time win in Glens Falls in their seventh trip.

Elmer also netted a hat trick against Adirondack on November 9th at the Cross Insurance Arena, a 5-1 Mariners win less than a month ago.

The series between the Mariners and Thunder switches to Portland tomorrow night for Teddy Bear Toss presented by the Maine Bureau of Highway Safety. It’s a 6 PM faceoff at the Cross Insurance Arena and fans are encouraged to throw stuffed animals onto the ice after the first Maine goal, proceeds to benefit local fire departments. The first 2,000 fans through the door will receive a collectible mini-stick, courtesy of Jobs In ME, and family four packs are available for purchase prior to the day of game. Groups of 10 or more can get discounted tickets by calling 833-GO-MAINE. Individual tickets can be purchased at MarinersOfMaine.com, at the Trusted Choice Box Office inside the Cross Insurance Arena, or by calling 207-775-3458. 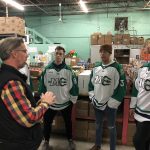 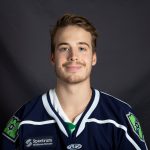