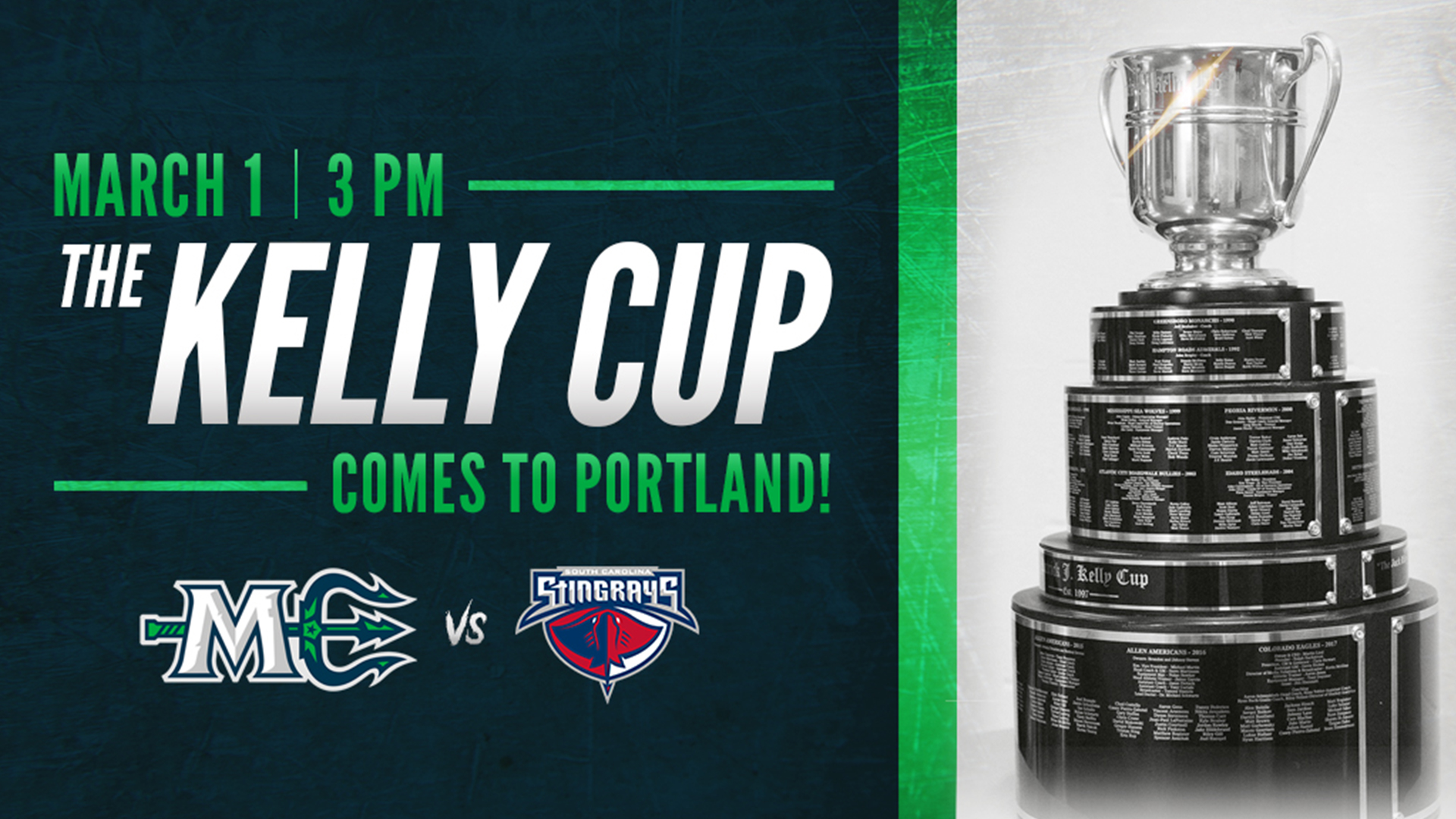 PORTLAND, ME – February 25, 2020 – The “holy grail” of the ECHL, the Kelly Cup, will make an appearance at the Cross Insurance Arena this Sunday, March 1st for the Mariners game against the South Carolina Stingrays at 3 PM. The Kelly Cup is the league’s championship trophy, awarded to the winner of the postseason tournament each year since 1997.

Named after the ECHL’s first commissioner, Patrick J. Kelly, the Kelly Cup took place of the “Riley Cup,” which served as the league’s championship trophy for the first eight seasons. The Mariners divisional rival, the Newfoundland Growlers captured the Kelly Cup in 2018-19. Eighteen different teams have hoisted the ECHL championship trophy. Two teams have won the Kelly Cup three times – one is Sunday’s opponent, the South Carolina Stingrays, and the other is the former Mariners membership, the Alaska Aces.

On Sunday, the Cup will be on display in the Saco & Biddeford Savings Hall of Fame Lounge, located just to the right of the Spring Street entrance to the Cross Insurance Arena. Fans are invited to view the Cup and take photos (one per person, assisted by a Mariners promo team member) from doors open (2:00 PM, 1:45 for season ticket holders) until five minutes remaining in the third period.

“We are excited to welcome the Kelly Cup to Maine,” said Mariners Vice President of Business Operations, Adam Goldberg. “We want our great fans to start thinking playoffs and motivate the team to finish strong. This is the goal every season and it is always an exciting opportunity to get your picture with a championship trophy. It is so much more than a piece of metal.”

Sunday is also “Reading Night,” presented by Northeast Charter & Tour Co., as the Mariners will recognize members of their summer “Read with ME” program. In addition, the Captain Joel Barnes Community Service Award will be handed out to one of three finalists, on the one year anniversary of the tragic passing of Berwick’s heroic firefighter. Following the game, fans can skate with the Mariners players. Sunday is the only meeting of the season with the Stingrays, who play in the South division, and currently hold the best record in the ECHL.

Groups of 10 or more can get discounted tickets for Sunday and all games by calling 833-GO-MAINE. Individual tickets can be purchased at MarinersOfMaine.com, at the Trusted Choice Box Office inside the Cross Insurance Arena, or by calling 207-775-3458. All Saturday and Sunday home games feature the Family Four Pack – four tickets, four food and drink vouchers, and four Mariners beverage koozies, starting at $80, and must be purchased in advance of game day.

MARINERS OVERPOWERED BY ROYALS IN READING
Scroll to top