PORTLAND, ME – December 20, 2018 – Yet another Mariner has earned an AHL call up. Rookie forward Drew Melanson was recalled to the Hartford Wolf Pack late Wednesday night for his second career AHL stint. Melanson is under contract with the Wolf Pack but has spent the entire 2018-19 season with the Mariners. He is the only player to have appeared in all 26 games.

A 23-year-old from Paramus, New Jersey, Melanson finished his college career with Boston University last season and signed with Hartford in late March. He spent the three prior NCAA seasons with RPI. It was in that final college season with BU, however, that Melanson had his best year – scoring six goals and adding 13 assists in 40 games. The Terriers went on to win the Hockey East Championship. With Hartford last season, Melanson appeared in five games, with one assist.

Melanson got off to a hot start for the Mariners, with two goals and five assists in his first five games. The quick success gave him the early lead in ECHL rookie scoring. He netted his first professional goal on October 21st against Newfoundland. On November 17th in Brampton, he registered his first career multi-goal game when he scored twice, including netting the shorthanded game winner in the third period. In total, Melanson has five goals and 12 assists in 26 games with Maine this season.

The Mariners play their final game before Christmas on Saturday night in Manchester at 6:00 PM. They return home after the holidays on Thursday, December 27th at 7:00 PM. They also host Worcester on Friday, December 28th at 7:15 PM for a 1-2-3 Friday, Nickelodeon Takeover Night, and First Responders Night. Tickets can be purchased at MarinersOfMaine.com or by calling 207-775-3458. 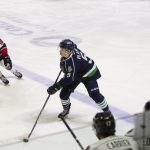