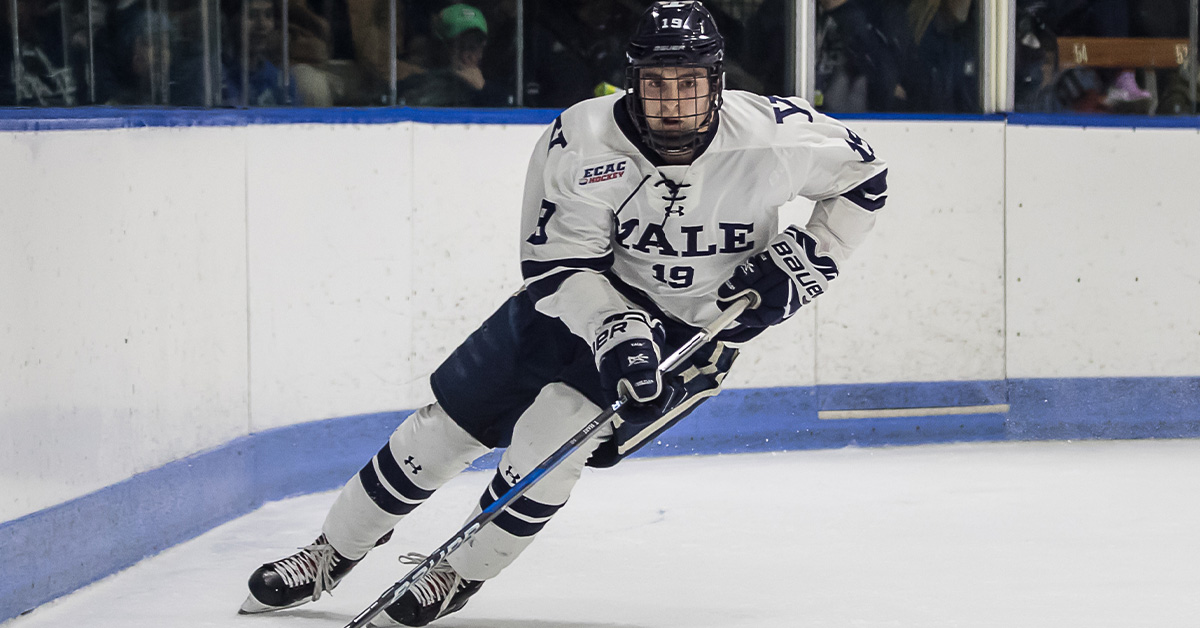 PORTLAND, ME – August 21, 2019 – Cumberland native and former Maine state champion Ted Hart has signed a standard player contract with the Mariners, the team announced on Wednesday. Hart, a forward, is coming off an NCAA Division I career at Yale University, and will attempt to become the first Maine-born player to play for the Mariners.

“It’s been six years since I left Greely High School, so it’s awesome to come back and get a chance to play in Maine again,” said Hart. “I grew up watching the Portland Pirates and it’s unbelievable to think I could play pro hockey in the same building they once did. I’ve been excited to start my pro career as is, but it will be even more special doing it in front of my friends and family.”

At Greely, Hart helped guide the team to back-to-back State Championships in 2012 and 2013.

“One of my favorite things about Cumberland is the town’s support for Greely athletics,” Hart said. “Cumberland takes pride in following and celebrating its teams. So for me and my friends to have our childhood culminate in back-to-back state titles is a feeling that’s difficult to replicate.”

Hart (6’1, 195 lbs) is now 23-years-old and was a mainstay in the Yale lineup for all four of his collegiate seasons. Of his three goals during his 2015-16 freshman campaign, two were game-winners, including one in overtime. Hart would play at least 31 games each of the proceeding three seasons, with a career high 11 goals in his sophomore year, good for third on the team. His junior season included three multi-goal games, highlighted by a hat trick on December 2nd, 2016 at Union. The same season, he was named to the ECAC Hockey All-Academic Team. He would repeat the achievement in 2018-19. Hart totaled 48 points (26 goals, 22 assists) in 120 career games at Yale.

“Ted will bring energy to our lineup with speed and grit which is always good when we get into the dog days of the season,” said Mariners head coach Riley Armstrong.

Hart has two older brothers, each with ECHL experience. Brian Hart, 25, is currently a forward for the Dundee Stars (Scotland), but played previously for Kalamazoo and Greenville. He’s also played in the AHL with the Syracuse Crunch. Brian attended and played at Ted’s rival school – Harvard University. Kevin Hart, the oldest brother (27 years old), attended Providence and debuted in the ECHL with the Elmira Jackals in 2014-15. After two seasons with Dundee, he returned stateside in 2018-19 and suited up in four games for the Worcester Railers, none of which were against the Mariners. All three Hart brothers played for both Greely and Phillips Exeter Academy (New Hampshire). Ted captained Phillips Exeter in 2014-15, leading the team with 49 points in 30 games.

“All three of us have shared very similar hockey backgrounds,” said Ted. “They have not only showed me what it takes to make the next level, but also what to expect when I get there. I was always thrown into their pond and street hockey games as well, which certainly helped me develop as a hockey player.”

While the Mariners may have seemed like an obvious destination for Hart given his background, he pointed out other factors that contributed to his decision to sign.

“The coaches and the rest of the staff [in Maine] are loved by the players, and they also seem to do an excellent job of giving players opportunities up in the AHL,” said Hart. “I know Portland is a great place to live and the fans are awesome, so it was really the coaching staff and their ability to develop players that put the Mariners over the top.”

Forward and Biddeford native Trevor Fleurent signed with the Mariners last summer and stayed with the team through the preseason, after which we was released. Brunswick’s Brian Billett, a goaltender, was also at 2018-19 training camp. Although a Maine-born player has yet to suit up in a regular season game for the Mariners, forward Terrence Wallin calls Maine home. Wallin was born in Yardley, PA.

The second season of Maine Mariners ECHL hockey kicks off October 11th at home when the Adirondack Thunder visit the Cross Insurance Arena for a 7:15 PM faceoff. Full and half season plans along with 12-game mini plans, flex packs, and group tickets are on sale now by calling 833-GO-MAINE or visiting the Mariners front office at 94 Free St. in Portland. Single game tickets will go on sale September 16th.