PORTLAND, ME – March 11, 2019 – Goaltender Chris Nell was reassigned to the Mariners from the AHL’s Hartford Wolf Pack on Monday morning. Nell, who is under contract with the New York Rangers, began the season in Maine, and was recalled and subsequently loaned to the Greenville Swamp Rabbits in November. He has spent the last month in Hartford.

The Green Bay, WI native made his Mariners debut on October 19th, in a 6-4 loss to the Reading Royals at the Cross Insurance Arena. After a pair of rocky starts, Nell registered the franchise’s first road win when he made 34 stops to beat the Royals in Reading on November 7th. He played well again in what would be his final Mariners start of 2018 on November 16th, as he took a tough luck loss in Brampton, stopping 43 of 46 Beast shots. When Connor LaCouvee returned from his loan to AHL Utica, Nell was the odd man out and was moved to Greenville, where he finished the 2017-18 season.

In 27 games with the Swamp Rabbits, the 24-year-old Nell posted an 11-14-0-2 record with a 3.09 GAA and a .899 SV%. He registered one shutout. On February 20th, Nell was recalled to the Wolf Pack and has appeared in two games, starting one. He defeated Providence on February 24th, making 29 saves on 30 shots. The Rangers recently signed University of Connecticut goaltender Adam Huska to an entry-level deal, placing him in Hartford to backup Brandon Halverson.

The Mariners released Hannu Toivonen on Sunday to make room for Nell on the roster.

The Mariners are off until Saturday when they travel to Worcester to take on Railers at 7:05 PM. They’re home on Sunday (Mar. 17th) when they host the Newfoundland Growlers at 3:00 PM for Beacon’s Birthday Bash presented by Evergreen Credit Union. Only six home games remain in the regular season. Tickets to can be purchased HERE or by calling the Trusted Choice Box Office at 207-775-3458. 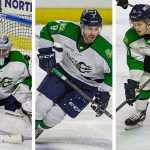