MANCHESTER, NH – February 1, 2019 – The Mariners scored the game’s first and last goals but three unanswered in the middle by the Monarchs carried Manchester to a 3-2 win on Friday night at the SNHU Arena. The Mariners have lost five games in a row and 11 of 14 overall. Greg Chase and Michel McNicholas each had a goal and an assist in the losing effort.

Chase scored his 9th of the season at 15:15 of the first, stepping out of the penalty box and receiving a touch feed from McNicholas. Chase skated in alone and Charles Williams and deked him with a shot to the high blocker side for a 1-0 Mariners lead. The Mariners were shorthanded four times in the first, and Manchester capitalized on their fourth chance at 17:44 to tie the game. Travis Walsh’s blast got blocked in the slot and Cory Ward zipped the rebound past Halverson. The Mariners put 17 shots on goal in the opening frame.

Early in the 2nd, Manchester took a 2-1 lead when Austin Block circled the goal and found Drake Rymsha back door at 2:48. The Monarchs went up 3-1 when Michael Doherty drove the net and tipped a Spencer Watson pass behind Halverson at 13:38. Soon after, Morgan Adams-Moisan was called for a five-minute major penalty for head contact and received a match penalty for a hit on Doherty. The Mariners were able to kill the penalty and head to the third down just two.

At 6:11 of the third period, McNicholas snapped a 13 game goalless drought when Jon Jutzi and Chase set him up for a power play goal. The Mariners made a strong push to tie the game but had their comeback effort derailed when Jason Salvaggio was called for slashing inside two minutes remaining. Chase took an additional slashing penalty to give Manchester a 5-on-3 which allowed them to run out the clock.

Charles Williams made 41 saves in the win while Brandon Halverson stopped 37 of 40 on the other side. Manchester has won four of the last five head-to-head meetings.

The Mariners are home on Saturday for “Women in Sports night” presented by the Maine Sports Commission as they begin a five game home stand. Special ticket packages that include pre-game talks from three “Women in Sports” guest speakers are available by calling Molly Brenerman at 207-761-4363. The first 2,000 fans through the gate will also receive a Grocery Tote Bag, presented by Townsquare Media. Game time is 6:00 PM. General admission tickets can be purchased HERE or by visiting or calling the Trusted Choice Box Office: 207-775-3458. 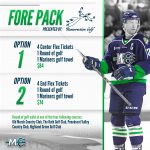 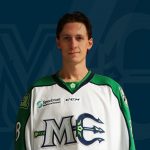