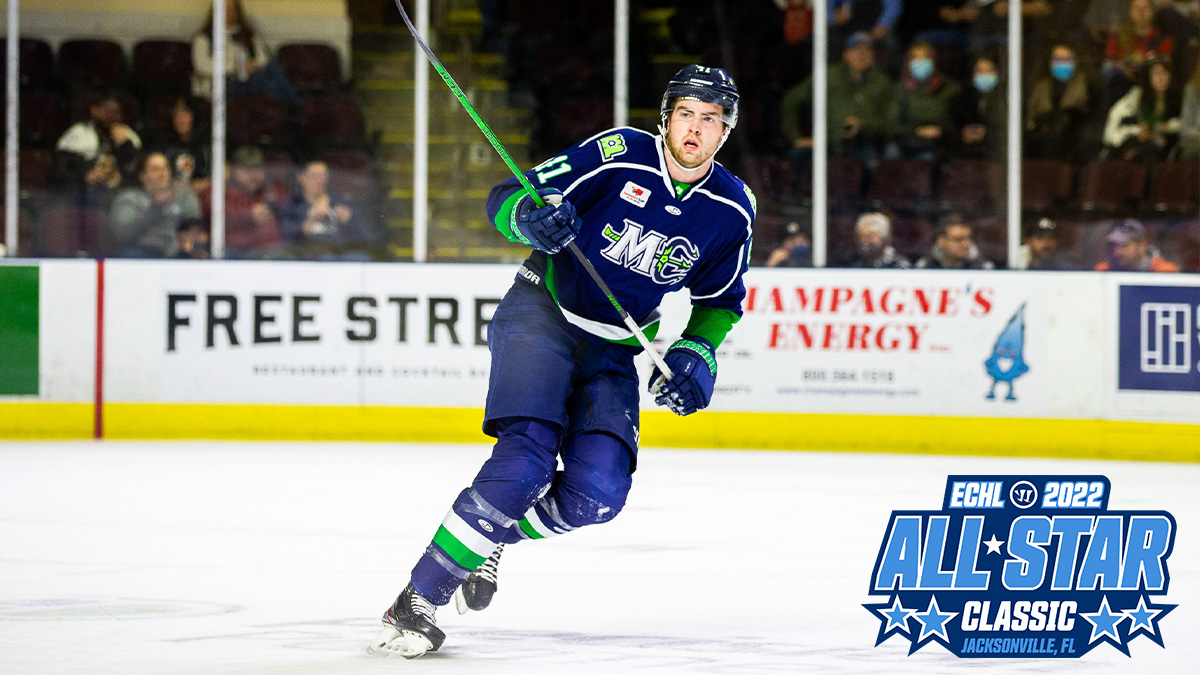 PORTLAND, ME – January 12, 2022 – The ECHL announced its rosters for the 2022 Warrior/ECHL All-Star Classic on Wednesday. Forward Justin Brazeau was named the Mariners representative for the event, which will be held on January 17th in Jacksonville, FL.

The big forward (6’6, 225 lbs) led the Mariners in scoring virtually from the outset of the season up until his AHL recall to the Providence Bruins on December 9th. With Maine, Brazeau has scored 10 goals and added 10 assists in 18 games. He has a pair of multi-goal games, including the final game before his recall on December 8th, when he scored twice in a 7-6 overtime loss at Worcester. On November 12th, Brazeau had a five-point game, with a goal and four assists in an 8-7 OT home loss to Trois-Rivieres.

“Justin is having as dominant of a season as I’ve seen this year with the puck below the top of the circles,” said Mariners Head Coach Ben Guite. “When he moves his feet, protects the puck and drives the net, no one in this league can defend him. He’s a threat every time he touches the puck. He understands what his strengths are and uses them every time he is on the ice. That consistency to play to his strengths is the biggest reason for his point production, All-Star nomination and call-up to Providence.  We are proud and happy for him, he’s put in the work and reaping the rewards.”

Brazeau is on an AHL contract with Providence and has appeared in eight games for them since being called up, scoring three goals and adding one assist.

The ECHL All-Star Classic will be held at VyStar Veterans Memorial Arena in Jacksonville, Florida on January 17th. The host team, the Jacksonville Icemen, will face a team of ECHL All-Stars. There will also be a skills competition. The event begins at 7:30 PM and will be televised on NHL Network and FloHockey.

The Mariners, proud affiliates of the Boston Bruins, have a light week ahead, playing only a road game at Worcester on Wednesday night at 7:05 PM. They return home to the Cross Insurance Arena on Friday, January 21st to begin a six game homestand, hosting the Orlando Solar Bears at 7:15 PM. It’s Women in Sports night, featuring a pre-game panel, highlighted by former U.S. Olympian and current President of the Boston Pride, Colleen Coyne. It’s also a 1-2-3 Friday: $1 popcorn, $2 hot dogs, and $3 Bud Light Drafts through the start of the 2nd period. The game is presented by Kit NA Brewing. Individual tickets for all games can be purchased online at MarinersOfMaine.com/tickets or by visiting the Trusted Choice Box Office inside the Cross Insurance Arena.