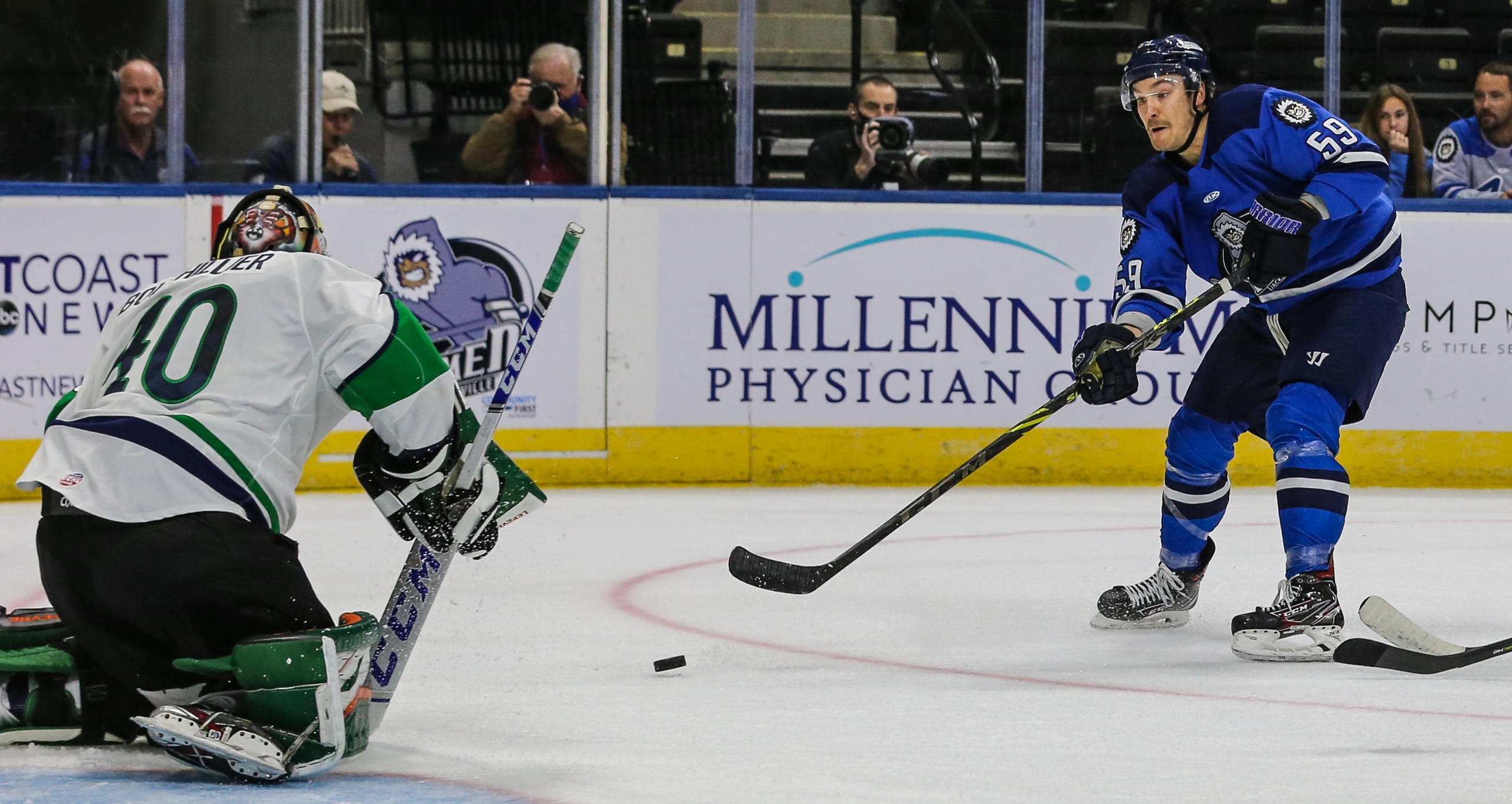 JACKSONVILLE, FL – November 17, 2021 – Zach Bouthillier made 37 saves – 19 of which came in the third period, to earn the first win of his professional career and lead the Mariners to their third straight victory. In another low-scoring affair, the Mariners got 2-1 win over the Jacksonville Icemen on Wednesday night at the Vystar Veterans Memorial Arena.

The first period took a similar pattern to Tuesday’s game, with the Icemen striking first and the Mariners answering back. Defenseman Jeff Taylor, a former Mariner, beat Bouthillier with a shot from the point at 6:07 to break the scoreless tie. After a Jacksonville hooking penalty, the Mariners, who have the league’s best power play, quickly converted. Justin Brazeau sitting on the top of the crease, tipped in a shot from Brycen Martin to tie the game. Pascal Laberge also assisted.

At exactly the halfway mark of the 2nd period, the Mariners took their first lead. Cam Askew got tangled up with Icemen defenseman Zach Berzolla, and when Jacksonville couldn’t get the puck out of the zone, Mathew Santos fed Askew for a one-timer past netminder Charles Williams. Brendan Robbins picked up a secondary helper on the tie-breaking goal. Bouthillier made a big save on Jake Elmer late in the frame to preserve the 2-1 Mariners lead.

The third period belonged to Bouthiller, as well as the Maine penalty kill, which successfully killed off three penalties and went 5/5 in the game. Bouthiller racked up 19 stops as the Mariners got outshot 19-1 in the final frame. Bouthillier finished with 37 stops to earn his first pro win. Williams made 18 saves on 20 shots in the loss.

The Mariners (5-3-1-0) finish their series with Jacksonville on Friday at 7 PM, before traveling to Orlando on Saturday to play the Solar Bears. After their Florida trip, they’ll return home for a pair of games around Thanksgiving on November 24th and 26th. They host the Worcester Railers on Wednesday the 24th at 7:00 PM as the VIP Rivalry Cup continues. The Newfoundland Growlers come to town on the 26th for a 7:15 PM faceoff and Marvel Super Hero™ Night, which will feature Black Panther specialty jerseys. Individual tickets can be purchased online at MarinersOfMaine.com or by visiting the Trusted Choice Box Office inside the Cross Insurance Arena.