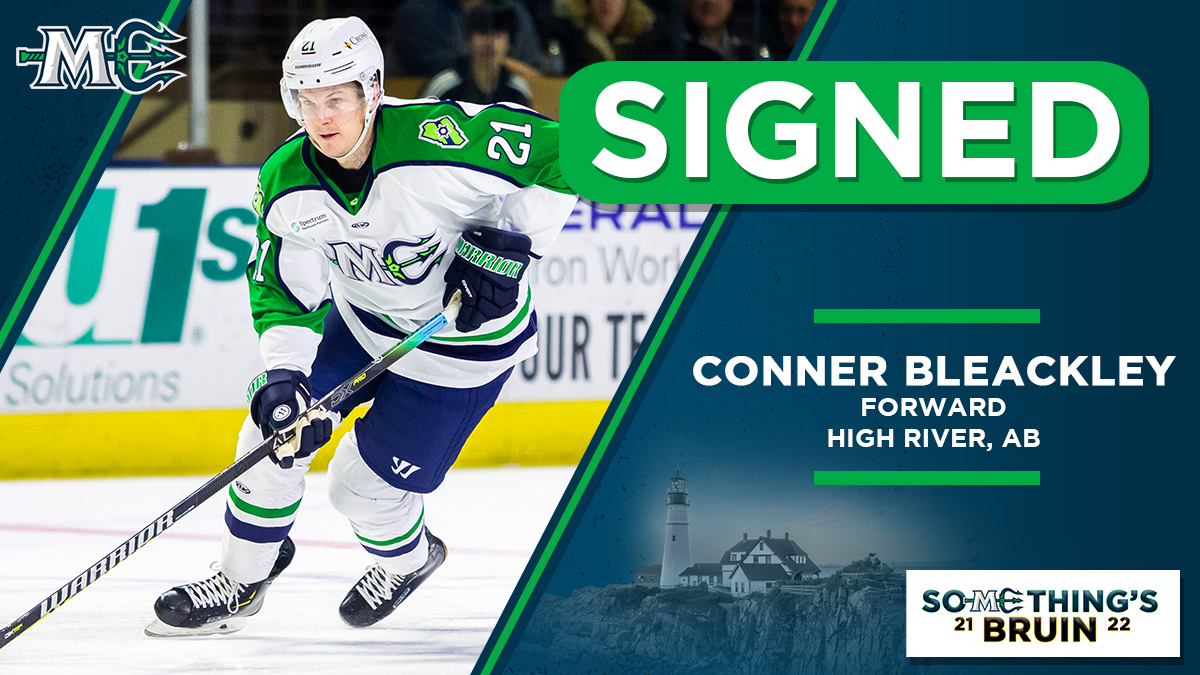 PORTLAND, ME – September 28, 2021 – The Mariners and forward Conner Bleackley agreed to a contract for the 2021-22 season, the team announced on Tuesday. Bleackley returns to Maine after spending the end of the 2019-20 season with the Mariners.

Bleackley, now 25 years old, holds the rare distinction of being selected twice in the NHL Entry Draft. In 2014, he was a first round pick of the Colorado Avalanche, going 23rd overall. After being traded to the Arizona Coyotes, Bleackley did not sign an entry level deal and re-entered the draft in 2016. The St. Louis Blues took him in the fifth round, 144th overall.

Under his entry level contract with the Blues, Bleackley moved up and down between the American Hockey League and ECHL over the first three years of his professional career. He debuted in 2016-17 with the AHL’s Chicago Wolves, and also spent part of the season with the ECHL’s Missouri Mavericks. Over the next two seasons, Bleackley suited up with the Blues’ new AHL affiliate, the San Antonio Rampage, and also played with their ECHL club, the Tulsa Oilers. His 2017-18 statistics with Tulsa represent his best professional season to-date: 38 points (19 goals, 19 assists) in 40 games. He was also named to the ECHL All-Star Classic.

During the 2019-20 season, Bleackley played for four different teams. He originally signed with the ECHL’s Idaho Steelheads, and was loaned to their AHL affiliate, the Texas Stars. In January of 2020, the Steelheads sent Bleackley to the Mariners as part of a three-team trade, which saw forward Taylor Cammarata dealt to the Orlando Solar Bears. Bleackley was briefly loaned to the AHL’s Hartford Wolf Pack during his time in Maine, but played just one game for them. With the Mariners, he played in 15 games, scoring five goals and adding five assists. He scored one of the two goals in the last game the Mariners played before the pandemic: a 3-2 loss to the Norfolk Admirals at the Cross Insurance Arena on March 10th, 2020.

Bleackley, a native of High River, Alberta, intended on returning to Maine for 2020-21, but when the pandemic cancelled the Mariners season, he signed with the Allen Americans. In 32 games for Allen, Bleackley scored four goals and chipped in five assists. In April of 2021, he was dealt to the Indy Fuel, but did not appear in a game.

Prior to turning pro, Bleackley was a big-time scorer in the Western Hockey League for the Red Deer Rebels. He had three seasons of at least 46 points, including a 68-point campaign in 2013-14. Bleackley was a three-year captain for the Rebels as well.

The Mariners have now announced a total of fourteen players to the 2021-22 roster. Training camp is set to begin in less than two weeks.

The Mariners are now proud affiliates of the Boston Bruins and begin their 2021-22 season, presented by Hannaford To Go on October 22nd, with the home opener against the Worcester Railers, sponsored by Skowhegan Savings. The full schedule can be found here. Full season, half season, 12-game mini plans, and 10-ticket flex plans, as well as group tickets are available now. Single game tickets will go on sale tomorrow, September 29th. More information on current ticketing options is available by calling 833-GO-MAINE, emailing mariners-sales@comcastspectacor.com, or by visiting MarinersOfMaine.com.