PORTLAND, ME – February 20, 2022 – Conner Bleackley couldn’t have dreamed of a better way to register his 100th career ECHL point. With a one-time blast at the 3:28 mark of overtime, Bleackley hit the milestone in style to secure the Mariners a 2-1 victory over the Trois-Rivieres Lions on Sunday afternoon at the Cross Insurance Arena. With the win, the Mariners snapped a six-game losing streak.

The Lions struck early when Cedric Montminy finished off a 3-on-2 rush with a backhander past Callum Booth just 2:53 into the game. The goal seemed to wake up the Mariners who were the better team for the rest of the period. At 14:27, they got even with a power play goal from Cam Askew, his second power play tally in as many days. Zach Malatesta teed up Michael Kim for a one-timer that Askew collected off the pad of Carmine-Anthony Pagliarulo and cashed in for his 12th goal of the season. The 1-1 score held up through two periods as neither team found the net in the middle frame.

The defense and goaltending battle continued through the third period, as each team mustered just 14 combined shots over the final 40 minutes of regulation and the game proceeded to overtime. Just under halfway though the sudden death frame, Tyler Hinam fed Bleackley from the right circle to the left one and Bleackley’s one-timer beat Pagliarulo’s stick side. Defenseman Nate Kallen, returning off injury picked up the secondary helper on the game-winner.

Booth earned his 5th win of the season, making 23 saves. Pagilarulo turned aside 25 in the loss. It was the sixth overtime or shootout result in 13 games between the Mariners and Lions this season.

The Mariners (20-20-4-2) embark on a five-game road trip starting next week that will take them to Trois-Rivieres on Wednesday and, Glens Falls, NY (Adirondack) on Friday and Saturday. Their next home game is Wednesday, March 9th against the Worcester Railers at 7 PM. It’s “Reading Night.” Tickets for all home games can be purchased online at MarinersOfMaine.com/tickets or by visiting the Trusted Choice Box Office inside the Cross Insurance Arena. 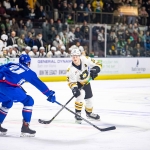 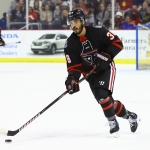