PORTLAND, ME – November 27, 2018 – The Mariners are getting a big offensive weapon back in their lineup. Alex Kile will return from his loan to the AHL’s Utica Comets and be available for tomorrow night’s game against Reading. Kile was loaned to the Comets on November 10th, after scoring seven goals and adding two assists through 10 games with the Mariners.

Kile appeared in 4 games for Utica without a point and with a -3 rating. It was his second AHL stint after having played 12 games with the Rochester Americans in 2017. Kile signed with the Mariners in late June, becoming the first player on the roster. He scored four goals in the first three home games of the season, including the game winner in the franchise’s inaugural win against Newfoundland on October 21st. Even with his absence over the last five games, he still leads the Mariners in goals (7) and power play goals (3).

The Mariners are home this Wednesday and Friday night. They host the Reading Royals at 7:00 PM on Wednesday before welcoming in Worcester at 7:15 PM on Friday. Friday is another 1-2-3 Friday: $1 hotdogs, $2 popcorn, and $3 Bud Lights through the start of the 2nd period. It’s also Rivalry Night and Highway Safety night presented by the Maine Bureau of Highway Safety. Tickets can be purchased at MarinersOfMaine.com or by calling 207-775-3458. 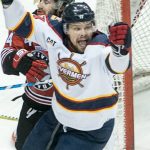