MANCHESTER, NH – December 31, 2018 – On the same day that 2018 comes to an end, so does the Maine Mariners winning streak. A 3-2 final in favor of Manchester, snapped the streak at six on Monday night at the SNHU Arena. Morgan Adams-Moisan scored both Mariners goals.

After playing their first 0-0 1st period of the season, the Mariners grabbed a 1-0 lead at 9:01 of the 2nd period when Ryan Culkin’s shot from the point was deflected by Adams-Moisan in front. The Mariners were in control of the game through most of the first 40 minutes, but in the final minute of the second, just as a Monarch power play ended, Daniil Miromanov tied the game with a wrist shot from the left-wing circle. The game headed into the third tied at one.

The Monarchs came out in the third with momentum and Cory Ward put Manchester ahead at 7:49 of the third finishing a pass from Miromanov just in front of Mariners netminder Brandon Halverson. The Mariners went to the power play with just over four minutes remaining and pulled Halverson at the tail end. David Kolomatis blocked a shot and skated away for an empty netter at 18:42, his third goal against Maine this season (out of five total). With 37 seconds to go, Adams-Moisan scored his second of the game and was subsequently slashed by Jack Nevins, giving the Mariners one last gasp. They never had a good chance to tie the game, and fell by a 3-2 final.

Charles Williams was fantastic for Manchester, with 36 saves while Halverson made 29 stops in the loss. The Mariners remain in third place with Reading’s loss at Wheeling, but fall three points behind Adirondack for second.

The Mariners are back home over the weekend to welcome in the Brampton Beast on January 4th and 5th. Friday, January 4th is another 1-2-3 Friday, while Saturday night is “Throwback Night” featuring original Maine Mariners jerseys (live auction postgame) and alumni appearances. The first 2,000 fans will also receive a logo puck. Tickets can be purchased at MarinersOfMaine.com or by calling 207-775-3458. 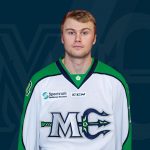