PORTLAND, ME – March 14, 2019 – The Mariners will add a key piece to their forward depth this weekend, adding forward Morgan Adams-Moisan back to the lineup, reassigned from the AHL’s Laval Rocket on Thursday. Adams-Moisan was recalled to the AHL for the second time this season on February 11th, and played in ten games for the Rocket, scoring one goal.

The 22-year-old La Tuque, QC native is third on the Mariners stat sheet with 15 goals, most of which came in the months of December and January. After going his first 14 games without a goal, Adams-Moisan’s first pro tally on November 28th – a shorthanded goal vs. Reading, sparked a run of 13 goals in 17 games. He earned his first call up on December 11th, but got into just one game before being returned to Maine on Christmas Eve. He picked up right where he left off with the Mariners, scoring 8 goals in 10 games upon his return. He scored his first career AHL goal on February 16th at Binghamton.

Adams-Moisan is a first year pro, signing with Laval after a breakout final year of junior hockey in the QMJHL with Drummondville. The 6’2, 215-pound forward has also been one of the Mariners’ leading enforcers this season, topping the team in penalty minutes (98). His re-addition to the roster along with 6’2, 220-pound Branden Troock (acquired at last week’s trade deadline from Atlanta), will add significant size to the lineup.

The Mariners are in action Saturday when they travel to Worcester to take on Railers at 7:05 PM. They’re home on Sunday (Mar. 17th) when they host the Newfoundland Growlers at 3:00 PM for Beacon’s Birthday Bash presented by Evergreen Credit Union. Only six home games remain in the regular season. Tickets to can be purchased HERE or by calling the Trusted Choice Box Office at 207-775-3458.

Instagram has returned invalid data. Follow Me!
Followon TwitterSubscribeto RSS Feed
MARINERS WEEKLY: Inside the Division for the Last Eleven 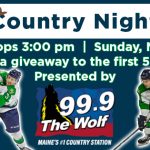 MARINERS AND 99.9 THE WOLF PRESENT “COUNTRY NIGHT”
Scroll to top