PORTLAND, ME – March 23, 2019 – The Laval Rocket of the AHL recalled forward Morgan Adams-Moisan from the Mariners on Saturday. The big man was recently returned to Maine after an extended look with Laval in which he scored his first AHL goal. It’s his third recall of the season.

The 22-year-old La Tuque, QC native has had an impressive rookie season in Maine, ranking third on the team with 15 goals and 9th in points, with 21. After going his first 14 games without a goal, Adams-Moisan’s first pro tally on November 28th – a shorthanded goal vs. Reading, sparked a run of 13 goals in 17 games. He earned his first call up on December 11th, but got into just one game before being returned to Maine on Christmas Eve. He picked up right where he left off with the Mariners, scoring 8 goals in 10 games upon his return.

Adams-Moisan was recalled a second time on February 11th and scored his first career AHL goal on February 16th in a win at Binghamton.

A first year pro, Adams-Moisan signed with Laval after a breakout final year of junior hockey in the QMJHL with Drummondville. The 6’2, 215-pound forward has also been one of the Mariners’ leading enforcers this season, topping the team in penalty minutes (98).

The Mariners are off tonight, hosting Manchester tomorrow afternoon at the Cross Insurance Arena for Country Night presented by 99.9 The Wolf. The first 500 fans will get a bandanna and concert giveaways will be held during the game including Luke Bryan, Florida Georgia Line, and Old Dominion. Tickets can be purchased HERE or by calling the Trusted Choice Box Office at 207-775-3458. 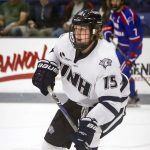