Haven’t been to a hockey game before? No problem. First, grab some tickets. Next, study up on the basics of our great game and impress your friends and family with your knowledge as you cheer the Mariners on to victory! Class is in session for hockey 101:

Blue line: The pair of one-foot wide blue lines which extend across the ice at a distance of 64 feet from each goal. These lines break up the ice into attacking, neutral and defending zones.

Breakaway: When a player skates in alone on the goaltender, one on one.

Change/line change: Switching the player personnel on the ice. Hockey is the only sport where this occurs during play (“on the fly”).

Faceoff: The drop of the puck by the official to determine possession. The start of each period and resumption of play following a whistle or goal is accompanied by a faceoff.

Hat trick: When a player scores three goals in a game. A “natural hat trick” is three consecutive goals without other scoring from teammates or the opposition.

One-timer: Hitting the puck directly after receiving a pass. The offensive player takes his backswing while the puck is on its way to him and tries to time his swing with the arrival of the puck.

Overtime: When the game time elapses 60 minutes and the score is tied. Regular season overtime is 5 minutes long and 3-on-3. Playoff overtime is 20 minutes and 5-on-5. The first goal wins the game.

Penalty box: The area opposite the team benches where penalized players serve time.

Penalty kill: An attempt to prevent the opposition from scoring while shorthanded due to a player in the penalty box.

Shootout: In the regular season, when no winner is determined through overtime, a series of penalty shots occurs – three per team, to determine a winner.

Zamboni: The machine that resurfaces the ice before the game and between periods.

Center – The quarterback on the ice, the center leads the attack by carrying the puck on offense. He exchanges passes with his wings to steer the play toward the opposing goal. On defense, he tries to disrupt a play before it gets on his team’s side of the ice.

Defensemen – These players try to stop the incoming play at their own blue line. They try to break up passes, block shots, cover opposing forwards and clear the puck from in front of their own goal. Offensively, they get the puck to their forwards and follow the play into the attacking zone, positioning themselves just inside their opponent’s blue line at the “points.”

Goaltender – The goalie’s primary task is simple – keep the puck out of his own net. Offensively, he may start his team down the ice with a pass, but seldom does he leave the net he guards.

Wings – The wings team with the center on the attack to set up shots on goal. Defensively, they attempt to break up plays by their counterparts and upset the shot attempts.

Goal Judges – One sits off-ice behind each goal and indicates when a goal has been scored by turning on a red light just above his station. The referee can ask his advice on disputed goals, but the referee has final authority and can overrule the goal judge.

Linesmen – Two are used. They call offside, offside pass, icing and handle all faceoffs not occurring at center ice. They do not call penalties, but can recommend to the referee that a penalty be called.

Official Scorer – He determines which player scores and credits assists if there are any. He may consult the referee, but the scorer is the final authority in crediting points.

Referees – Either one or two in a game. They supervise the game, call the penalties, determine goals and handle faceoffs at center ice to start each period. They wear an orange stripe on their arm.

You Can’t Do That?

Delayed Penalty – Whistle is delayed until the penalized team regains possession of the puck.

Misconduct – (10 minutes) Called for various forms of unsportsmanlike behavior or when a player incurs a second major penalty in a game. This is a penalty against an individual and not a team, so a substitute is permitted.

Penalty Shot – A free shot, unopposed except for the goalie, given to a player who is illegally impeded from behind when he has possession of the puck with no opponent between him and the goal except the goalie. The team which commits the offense is not penalized beyond the penalty shot, whether it succeeds or not.

Shorthanded – A team plays shorthanded when one or more of its players is charged with a penalty. However, no team is forced to play more than two players below full strength (six) at any time. When a third penalty is assessed to the same team, it is suspended until the first penalty expires. When a penalty is called on a goalie, a teammate serves his time in the penalty box.

When a player shoots the puck across the red center line and past the opposing red goal line. The linesmen will whistle the play dead if the defending team wins a race back to the faceoff dots. If an attacking player wins the race, play will continue. All skaters on the ice for the team committing the icing infraction must remain on the ice for the next faceoff. Icing is not called if the attacking team is killing a penalty, or if the officials determine the puck could have been played by the defending team.

When any member of the attacking team crosses the defending team’s blue line ahead of the puck carrier. 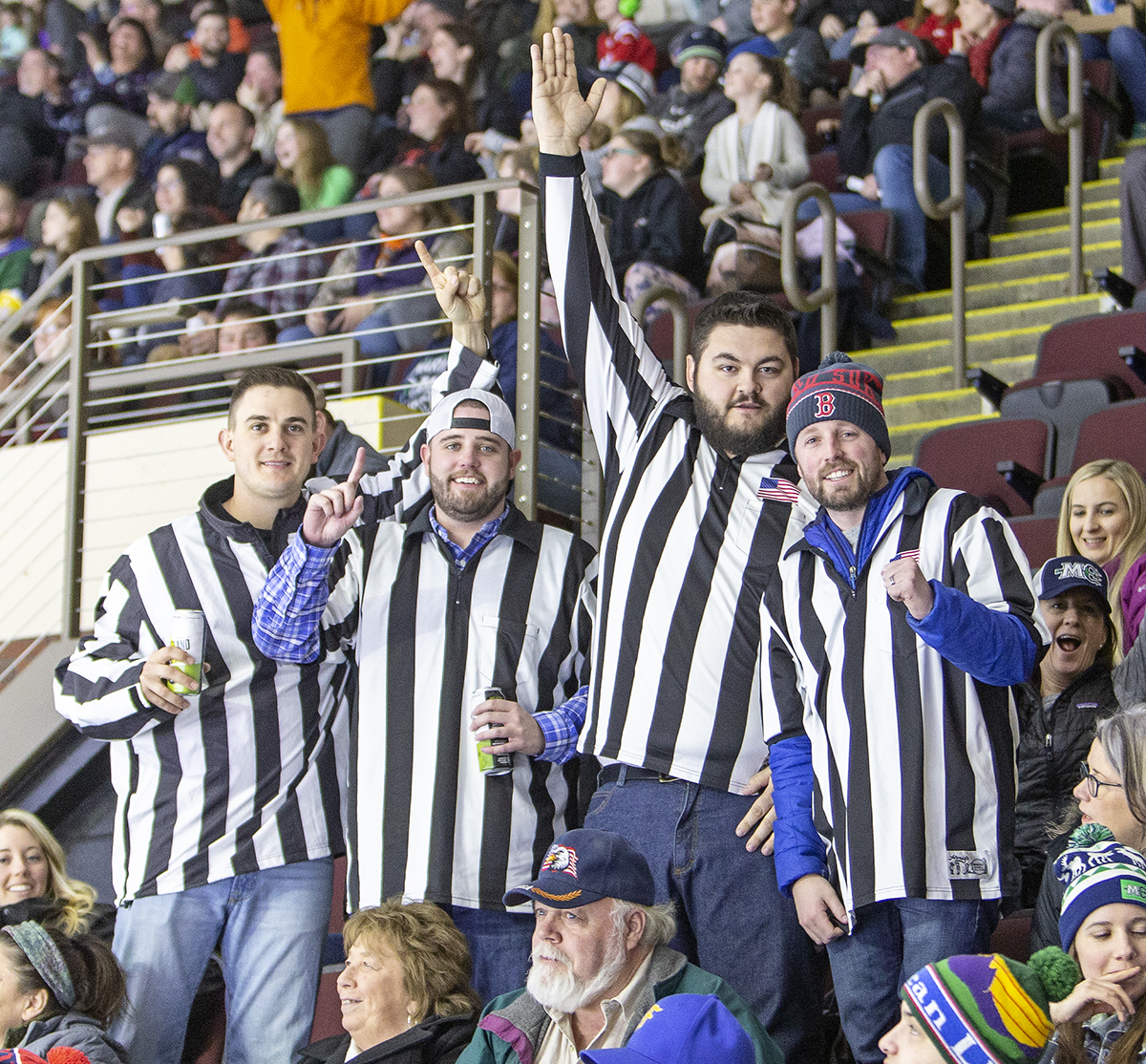