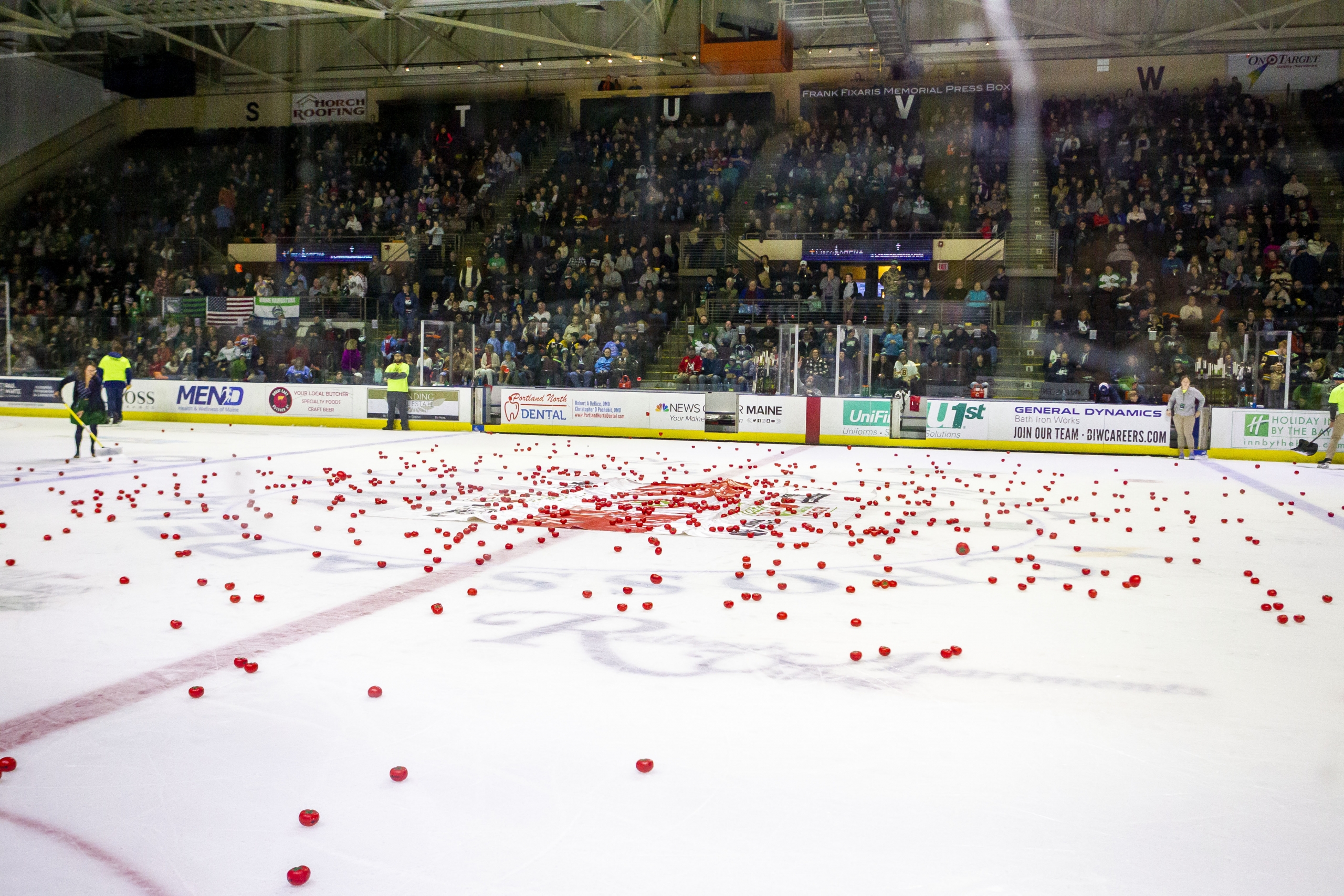 PORTLAND, ME – March 17th, 2021 – “Toss a Tomato, Win Some Dough,” has been a popular staple at Maine Mariners home games through the first two seasons of operation. Despite not playing a 2020-21 season, the Mariners have revived the game in a virtual way, with a “tomato drop” from the rafters of the Cross Insurance Arena.

Evergreen Credit Union is sponsoring the “virtual tomato drop,” which will take place on a date to be determined in early April. As is the case at Mariners home games, fans can purchase one tomato [stress ball] for $1 or six for $5. Sales are taking place at MarinersOfMaine.com/shop. Tomatoes “ID numbers” will then be assigned based on the amount of tomatoes purchased by a given individual.

The tomatoes will be dumped, all at once, from the rafters of the Cross Insurance Arena, directly above “center ice,” where the target will be placed, as usual. The grand prize will be 50% of the money collected, along with a 7 day luxury hotel stay from Steele Hill Vacation Club to Orlando, FL or Las Vegas, NV, not including travel costs. Additional prizes from the Mariners, Jersey Mike’s Subs, Three Dollar Deweys, and R.E.D.D. Protein Bars will also be given away.

Net proceeds from the virtual tomato drop will be donated to Good Shepherd Food Bank.

The 2021-22 Mariners season is presented by Hannaford To Go, and will begin with the home opener on October 22nd at the Cross Insurance Arena against the Worcester Railers. Fans can put down a deposit of $50 on full season tickets for the 2021-22 season here. Half season, 12-game mini plans, and 10-ticket flex plans are also available for purchase, starting at $170. Single game and group ticket information will be available in the coming months, as well as a full 2021-22 schedule. More information on ticketing options is available by calling 833-GO-MAINE, emailing mariners-sales@comcastspectacor.com, or by visiting MarinersOfMaine.com. 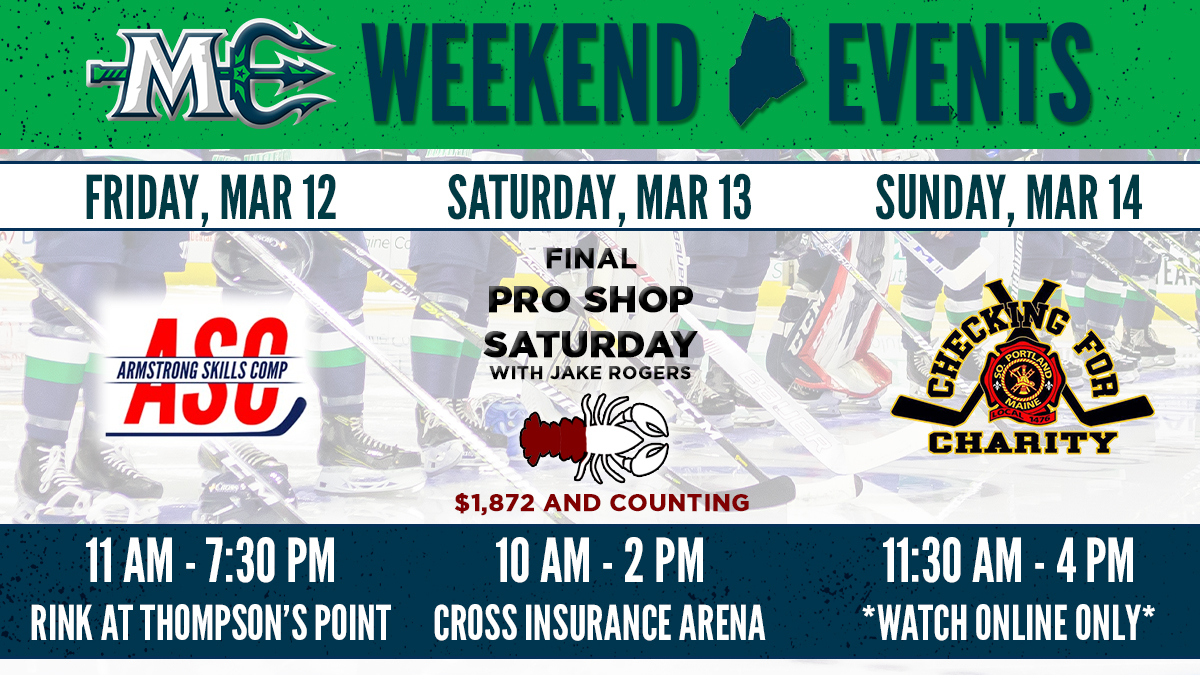 The Mariners are involved in three big community events this weekend! Here is all you need to know about what’s going on:

Armstrong Skills Competition
When: Friday, March 12th
Where: The Rink At Thompson’s Point
What time: 11 AM – 7:30 PM

Mariners Head Coach & Assistant General Manager Riley Armstrong and wife, Amber, have organized an outdoor skills competition for local hockey players of all ages. Two divisions (17 and under, 18 and older) will compete in fastest skater, puck relay, and hardest shot, with valuable prizes on the line. They’re also raffling off some big ticket items including signed jerseys from NHL players Charlie McAvoy and Tuukka Rask of the Boston Bruins. Proceeds are going to local businesses and non-profits. The Mariners will be on hand selling merchandise and tickets, as well as giving away mini-sticks to kids. Beacon The Puffin will make an appearance from 3-5 PM.

Mariners equipment manager Jake Rogers has raised over $1800 through the first four “Pro Shop Saturdays and this week is his final event! He’s offering skate sharpening for $6 and other equipment repairs at a quoted cost, with all proceeds benefiting local restaurants struggling through COVID-19. Jake also has a raffle going with prizes from the Mariners, Hartford Wolf Pack, and the University of Maine hockey team. Donations are also being accepted through a GoFundMe campaign. You find Jake at the Armstrong Skills Competition too!

The fourth annual Checking For Charity takes on a different look this year without spectators permitted to attend at Troubh Ice Arena. However, all three games (Red Riot Challenge, Firefighter Classic, Former Pro Showdown) will be broadcast online at the Checking For Charity Facebook Page with Mariners broadcaster Michael Keeley on the play-by-play. This year’s event is dedicated to the life of Travis Roy, and the Travis Roy foundation. The Mariners will have several personnel playing in the event including Riley Armstrong, Terrence Wallin, Ted and Brian Hart, and Ben Freeman. Donations can be made and merchandise or raffle tickets purchased at CFCMaine.org. A Dillan Fox autographed jersey is among the items in the raffle. 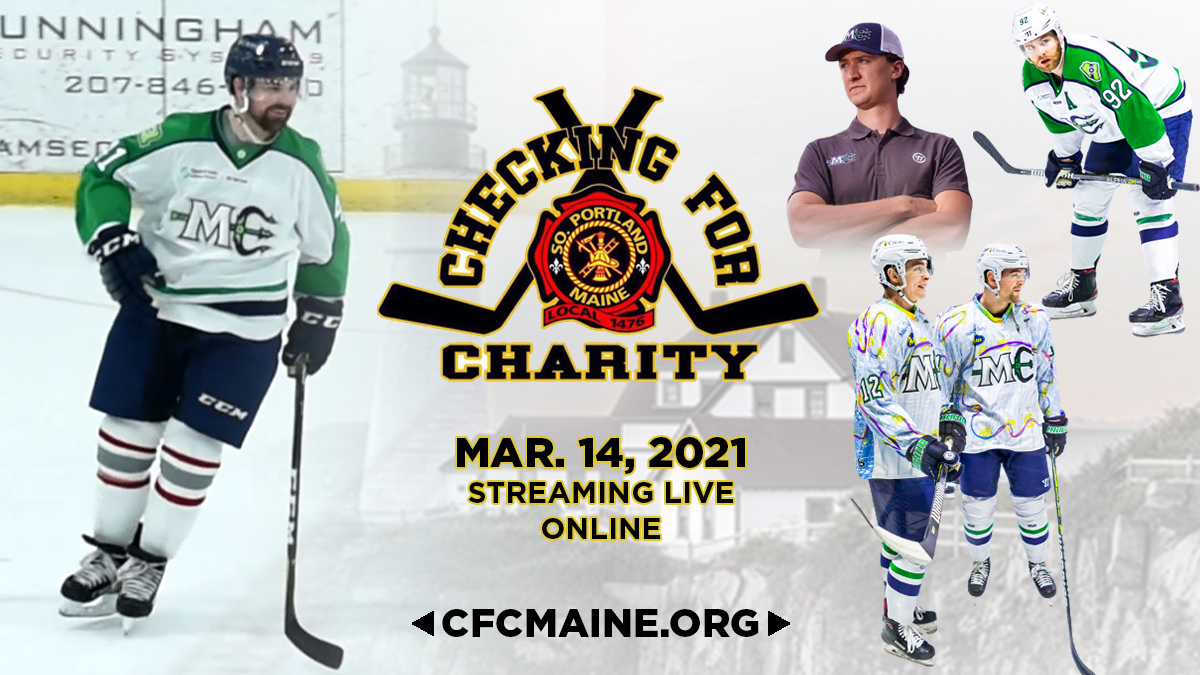 PORTLAND, ME – March 2nd, 2021 – The fourth annual “Checking For Charity” will take place on Sunday, March 14th at Troubh Ice Arena, and the Maine Mariners will be strongly represented. Riley Armstrong, Terrence Wallin, and Ted and Brian Hart are all playing in the tournament, while Michael Keeley will be broadcasting the event online.

The first of three games is the Red Riot Challenge at 11:30 AM, featuring South Portland High School hockey alumni players and coaches. Next up at 1:00 PM is the South Portland Firefighter Classic with firefighters from South Portland and the surrounding communities. Finally, the Former Pro Showdown at 2:30 will feature former professional and high level college players, including all four Mariners participants. Armstrong and former Assistant Coach Anthony Bohn participated in the 2019 event, with players Louie Rowe, Dwyer Tschantz, and Derek Pratt serving as “celebrity coaches.” The 2020 event was cancelled because of COVID-19.

“It always feels great for myself to get back in a locker room setting where you’re just telling stories, being with the firefighters, they’re pretty much a hockey team,” said Armstrong. “They’re all tight-knit and they have some good stories of their own.”

In addition to the four current Mariners representatives, Ben Freeman and Trevor Fleurent will also be playing in the Former Pro Showdown. Freeman, a 6’5 forward and native of Falmouth, signed with the Mariners out of the University of Connecticut this past summer. After the Mariners season was cancelled, he joined the Wheeling Nailers and played in seven games before being released. Fleurent is from Biddeford and made local headlines by trying out for the Mariners in their inaugural season of 2018-19. While he never played a regular season game for Maine, he has played professional hockey in the Southern Professional Hockey League as well as in Norway.

Due to the pandemic, this year’s “Checking For Charity” will run a little bit different than past events. Without spectators permitted, this year’s charity hockey event will be streamed online. Mariners play-by-play announcer Michael Keeley will broadcast all three games, with University of Maine hockey voice Jeff Mannix serving as color analyst.

“With nearly a year between hockey broadcasts, I’m really looking forward to calling these games,” said Keeley. “I’m also excited to work alongside Jeff Mannix who has as much knowledge as anyone about hockey in Maine.”

The game will be streamed on SeasonCast, with a link available on the Checking For Charity website and social media, as well as the Mariners pages.

This year’s Checking For Charity is dedicated to Travis Roy with a “generous” portion of proceeds raised going to his foundation. Travis, who tragically suffered a life changing injury in his first college hockey shift in 1995, while playing for Boston University, passed away on October 29th, 2020. He was born in Yarmouth, Maine, and became an inspirational speaker after he was left paralyzed from the neck down. He started the Travis Roy Foundation in 1996 with the goal of funding research for spinal cord injuries.

“We’re looking forward to getting back to what this event is about, and that’s raising money for those in need,” said Mike Norton, South Portland Firefighter and Checking For Charity committee member. “This year’s event is going to be a special one aimed at celebrating the life and work of Travis Roy, and we have some great tributes planned to honor him.”

The primary way that the public can support this year’s event is through their online raffle, merchandise store, or with monetary donations. A pair of Mariners jerseys will be included in the raffle. More information can be found on the Checking for Charity website.

About Checking For Charity

Checking For Charity was born out of a love for hockey and a desire to give back to the community. In 2017, two South Portland firefighters hatched up an idea: A charity hockey event with a couple of games and a focus on South Portland. Through the support and hard-work of many firefighters and community members the event has grown and raised over $40,000 in its first three years. The event is the largest fundraiser the South Portland Professional Firefighters conduct each year. All of the money raised is donated to a variety of non-profit organizations and charities. Although some money is donated to larger organizations, the vast majority of the money is donated to local groups.

Mariners season ticket packages (full, half, and 12-game mini plans), along with 10-ticket flex plans for the 2021-22 season are now on sale, starting at $170. Fans can call 833-GO-MAINE or email mariners-sales@comcastspectacor.com to contact a sales representative. The Mariners hockey operations staff are raising money for local businesses affected by COVID-19 through “Pro Shop Saturdays” and the “Armstrong Skills Competition.” Click here to read more. As always, shop the latest in Mariners merchandise at MarinersOfMaine.com/shop. In-office pickup is now available.